Magnetic beads mop up sunblock in the sea

Researchers have developed absorbent magnetic beads that could be used to clean up one of the environmentally harmful chemicals in sunblock when it leaches into the sea. 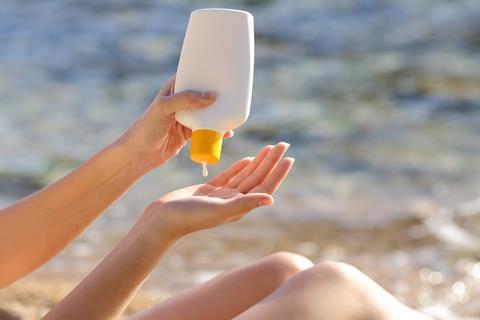 The UV-absorbing compound oxybenzone is a component in about 80% of sunblock products, as well as other products such as shampoo and detergents that ultimately end up in the ocean. It has been linked to bleaching in coral reefs near popular tourist beaches, where beachgoers take to the water in their thousands after liberally applying sunblock.

‘Very small amounts of oxybenzone – parts per trillion – have been shown to have toxic effects,’ says Felix Roman from the University of Puerto Rico, Mayaguez, who was speaking at the 254th American Chemical Society National Meeting and Exposition in Washington, DC. ‘It damages the DNA of corals, which starts the process of bleaching.’ He adds that up to 40% of sunblock that swimmers apply ends up in the surrounding water, where it can raise the concentration of oxybenzone as high as a few parts per million.

The team developed absorbent beads designed to soak up oxybenzone so that it can be removed from the water. The beads are made of iron oxide nanoparticles embedded in a matrix of alginate and chitosan – two naturally-derived materials that are non-toxic, so the beads themselves would not act as a pollutant.

‘We call it a bionanocomposite,’ says Roman. ‘We can drag [the beads] around in a net, or we can release it into the ocean and use a magnet to just pull it out. It’s a very simple and unique system.’

We can release the beads into the ocean and use a magnet to pull them out.

He explains that oxybenzone and other organic pollutants are absorbed by the beads because they interact with both the organic backbones of the alginate and chitosan, and with a layer of surfactant that coats the iron oxide core in the nanoparticles.

‘Oxybenzone has two benzene rings, and O—H groups that can form hydrogen bonds with the O—H groups present on the surfactant surface of the nanoparticles and the O—H groups in the chitosan,’ he says. ‘It’s a synergistic effect.’

The group tested their beads on samples of seawater with a high oxybenzone concentration – 30 parts per million – and showed they were able to remove 95% of the oxybenzone within an hour. The beads can also be separated from the oxybenzone and re-used after treatment. The next step, Roman says, is to test them in a salt water swimming pool, to work out how many would be needed to clean up pollutants on a larger scale.

‘We are in the early stages of development – there are many more things we can do,’ He says. ‘We need to improve the porosity of the beads and increase their capacity so we can use fewer of them.’

Victor Fernandez-Alos, a graduate student in Roman’s lab, says they are also working on developing beads that target different compounds that could be deployed in response to oil spills or water contamination.

‘We can modify the surface of the beads to target some polymers,’ says Fernandez-Alos. ‘For example, we are looking at polycyclic aromatic hydrocarbons … and endocrine disrupting compounds. For this type of removal we need to have different types of functionalities on the surface.’