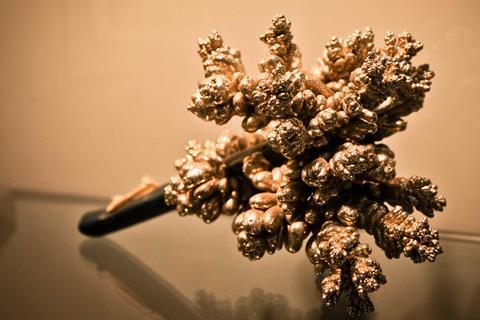 Pure metals can have ultrafast growth rates from their melts. Pure nickel crystals, for example, grow at a rate reaching 70m/s

Researchers from Australia have discovered a hidden pre-organisation mechanism that allows metal crystals to grow from the liquid at enormous speeds without having to overcome any kind of energy barrier.

‘As early as the 1950s and 60s, it was established that pure metals could freeze at enormous rates,’ says Peter Harrowell from the University of Sydney. Cooled to below its freezing point, silver can crystallise at a rate of up to 100 metres per second. The metal atoms seem to require no energetic push to arrange themselves into their crystal structure, while diffusion in liquids requires energy input to proceed – an apparent paradox as both processes need atoms need to move.

How exactly metals manage this barrierless crystallisation had been a longstanding question, which Harrowell and his team decided to tackle. Their computational simulations revealed that the liquid right in front of the crystal interface has a local energy minimum that is, in fact, already crystalline.

‘In a sense [the growing crystal interface] is managing to send out a hidden organisation into the liquid in advance of its own growth that pre-organises the liquid and allows it to rapidly collapse into the crystal state,’ Harrowell explains.

A disordered liquid can adopt an enormous number of possible arrangements, a small fraction of which is actually crystalline. ‘So the [crystal] interface doesn’t have to do a lot of work, all it has to be good at is selecting out from the huge library of options just that one structure that matches up with it,’ says Harrowell. This process requires almost no energy input as it is only uncovering what is already part of the liquid’s repertoire.

‘It’s pretty exceptional work – the researchers have determined the speed limit for crystal growth and resolved the origin of barrierless crystal growth,’ says Shiv Halasyamani who studies inorganic materials at the University of Houston, US.

Crystal growth, Halasyamani explains, is still a trial-and-error process. A better grasp of crystal kinetics could help scientists access materials like potassium beryllium fluoroborate (KBe2BO3F2). Although hugely promising for making deep ultraviolet lasers, nobody has so far been able to grow crystals larger than 4mm2, which has hampered its application.

Harrowell and colleagues found that some molten salts like sodium chloride can also grow crystals ultrafast. However, barrierless crystallisation seems to be limited to the simplest, face-centred cubic crystal structures. ‘Expanding this to non-metal, more complicated systems, that is the challenge,’ Halasyamani says. ‘It’s going to be tough but it’s doable.’