For decades biomedical researchers have dreamt of finding ‘magic bullet’ drugs to target killer diseases. Now, US researchers think they may have found a way to drive drugs deep into diseased tissues using actual nano-sized bullets propelled by tiny ‘cannons’ that are triggered by ultrasound pulses. 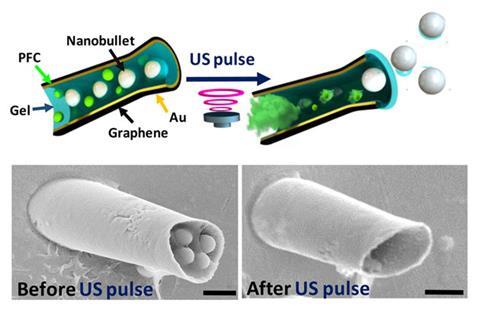 An ultrasound pulse triggers the evaporation of a perfluorocarbon emulsion (PFC) at the bottom of the cannon, propelling the

‘One of the most powerful propulsion methods in the macro world are cannons,’ says Joseph Wang, who led the research together with Sadik Esener at the University of California San Diego in the US. ‘So why not ultrasound-activated microcannons?’ The cannons are essentially tiny cone-shaped hollow tubes, synthesised by depositing a layer of graphene oxide and gold onto a polymer template. Before the surrounding polymer is removed, the cannons are loaded with silica bullets embedded in a gel matrix, along with an emulsion of perfluorocarbon. ‘Application of a focused ultrasound pulse by a piezoelectric transducer results in spontaneous vaporisation of the perfluorocarbon,’ explains Wang. The pressure this produces, he explains, causes the bullets to be shot out of the cannon at high speed.

The technology has many potential applications, but Wang and his colleagues have their sights set on drug delivery. ‘Such novel micro- or nanoscale ballistic tools could pave the way to deep tissue penetration on small scales, providing distinct advantages for diverse applications in drug delivery or microsurgery,’ he says. The team built a battery of microcannons anchored to a membrane and practised shooting nanobullets made from fluorescent particles at gel targets designed to simulate tissue. The eventual aim is to develop a device capable of delivering drugs to a specific target deep within diseased tissue, or injecting genetic material into cell nuclei for gene therapy. But so far the technique has not been tried using biological material.

The group are working on improving the capabilities of the microcannons, Wang says, and are currently focusing on expanding the different payloads they are capable of delivering – including the possibility of loading multiple drugs into a single cannon. ‘[We are] expanding the practical utility for in vivo work,’ he says.