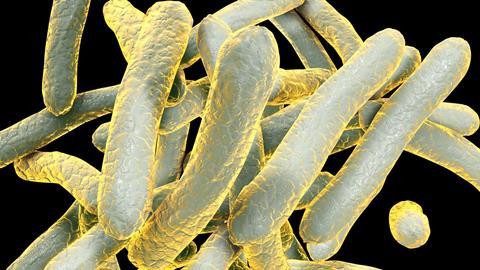 By replacing a rare amino acid in the structure of teixobactin, UK researchers have unlocked the door to cheaper and easier-to-manufacture forms of this potent antibiotic.

Scientists in the US reported their discovery of teixobactin in 2015. It works against multi-drug resistant pathogens, but as it contains a rare and difficult to manufacture amino acid it is hard to make.

‘We have tried to simplify the structure [of teixobactin] because it is very challenging to make it chemically. The main challenge comes from one cyclic amino acid called L-allo-enduracididine. It requires multi-step synthesis, it is expensive and it is very difficult to incorporate. So, what we’ve done is take something that already is available on the shelf and do one-step modification,’ explains the University of Lincoln’s Ishwar Singh, who headed the study.

Due to its mode of action, scientists have hailed teixobactin as a promising weapon against antibiotic resistance. It inhibits multiple biosynthetic pathways involved manufacturing cell walls so bacteria struggle to mutate fast enough to gain resistance. Indeed, tests have shown no detectable resistance.

So far, Singh and his colleagues have synthesised eight analogues of the antibiotic teixobactin by swapping L-allo-enduracididine for commercially available building blocks, such as lysine and ornithine. ‘We have three molecules that are better than vancomycin, and we have another two molecules that are similar to vancomycin but work by different mechanisms,’ says Singh. ‘We’re trying to address this current bottleneck in terms of synthesis; it is important to make more derivatives because the failure rate is high in the drug development process so you need a library of molecules.’

Mire Zloh, head of pharmaceutical chemistry at the University of Hertfordshire, UK, likes the work. ‘This will provide an opportunity to address the ever increasing problem of multi-drug resistance in bacteria,’ he enthuses. ‘It’s still too early to say if these commercially available amino acids will provide an opportunity to develop a drug because the whole molecule needs to be proven to have drug-like properties, but this is a step in the right direction. When we understand how modifications of that part of the molecule can be used to enhance the activity or molecular properties, we will be in a position to develop drug-like candidates. This is going to inform future drug design of novel antibiotics.’