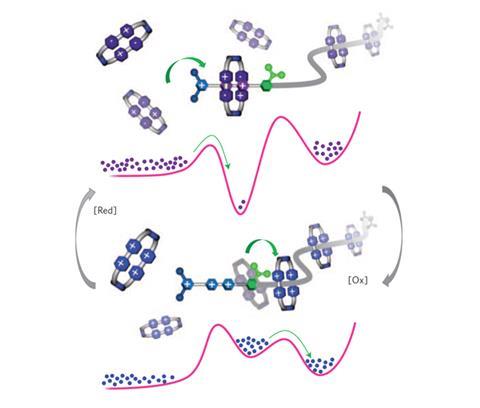 Researchers in the US have developed an artificial molecular pump which can accumulate small, highly charged molecules against a concentration gradient. This is something that is second nature to the cellular machinery found in living organisms, but is still a significant challenge in synthetic systems.

The team at Fraser Stoddart’s laboratory in Northwestern University in Illinois set themselves the task of threading two cyclobis(paraquat-p-phenylene) rings, each possessing four positive charges, onto a molecular chain and holding them in close proximity despite their significant coulombic repulsion. To do this, the team designed a dumbbell-shaped molecule consisting of a pumping mechanism at one end, capable of pulling in the rings, and a ‘holding area’ at the other end, where the captured rings remain trapped.

The ‘front end’ of the pump consists of a positively charged 3,5-dimethylpyridinium (PY+) unit linked to two positively charged viologen units (V2+). The next portion of the chain contains an isopropylphenyl molecule (IPP), which acts as a kind of ‘steric speed bump’. This leads on to an oligomethylene chain, which serves as the holding area for the trapped rings, with the structure terminating with a bulky 2,6-diisopropylphenyl stopper.

When the ring is initially presented to the pump, the large number of positive charges on each of the parties forbids any interaction. However, upon addition of a reducing agent the positive charges on the ring reduce from four to two, lowering the repulsion between the ring and the PY unit of the pump and allowing the ring to thread over the PY ‘gateway’ to form a complex with the viologens. Subsequent re-oxidation of the system reintroduces the positive charges, repelling the ring from the viologens. The injection of a small amount of thermal energy then drives the ring across the IPP speed bump, allowing the ring to move across and become kinetically trapped on the other side.

‘We can then repeat the first cycle and by the same process introduce another ring onto the methylene chain holding area,’ says team member Chuyang Cheng. Kinetically, the co-existence of the two rings in close proximity is favoured over the ejection of a ring from the pump past the various steric and coulombic barriers. The team is now investigating whether it is possible to pump further rings into the system if the holding chain is made longer.

Cheng’s co-worker Paul McGonigal says that while the pump is unlikely to have any immediate application, it represents an important move away from equilibrium chemistry to non-equilibrium systems with new and unexpected properties.

Supramolecular chemist Nicolas Giuseppone of the University of Strasbourg in France commends the Northwestern team. Their synthesis of a minimal chemical system to pump and concentrate molecules – something that requires complex enzyme machinery in nature – is, says Giuseppone, ‘very inspiring’.