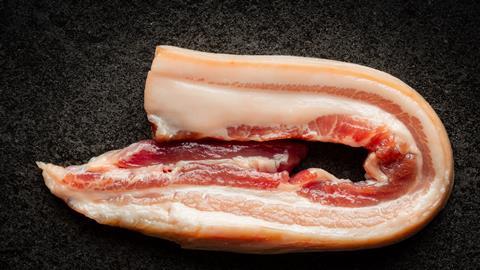 Have you ever wondered what the green pigment sometimes seen in bacon is? A team of US scientists did and have determined the structure of this ‘nitrite burn’.

Nitrite, which is produced naturally in the body, has been used to preserve meat for centuries. It is essential for preventing botulism and also gives the cured meat its characteristic colour and flavour. In addition, its reaction with myoglobin is thought to produce the green pigment often seen on the meat.

Some people are concerned about whether this nitrite burn – and indeed nitrite itself – has any health implications. For instance, some fear that a similar reaction between nitrite and human haemoglobin could lead to blue baby syndrome, a disease whereby nitrite in the blood decreases haemoglobin’s ability to carry oxygen (although this is usually caused by nitrites in groundwater, rather than food). However, little is known about its interactions with the body.

George Richter-Addo and his group at the University of Oklahoma have taken an important step in understanding nitrite’s interaction with haem compounds by fully characterising the structure of nitrite burn using single crystal x-ray diffraction. Most significantly, they found that nitration occurs at the 2-vinyl group of the haem macrocycle, but not the 4-vinyl, which is attributed to steric factors.

‘This is the first step to understanding the chemical function of this [nitrite burn],’ explains Richter-Addo. ‘Knowing the structure gives us very good hints on where we should proceed with looking at how it will react with other constituents present in the body.’

Scott Bohle, an expert in chemical biology at McGill University in Montreal, Canada, says that the work answers a lot of questions. ‘The specificity is surprising,’ he says. ‘I find it interesting that the nitration occurs out here [on the vinyl moiety].’ He also feels that there should now be more investigations in physiological conditions, and not just in the solid state.

Richter-Addo and his team are now looking to investigate if nitrite burn affects the physiological function of myoglobin and whether there are other human proteins that are affected by nitrite.