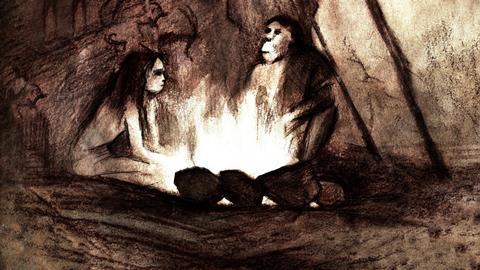 Neanderthals were masters at making and controlling fires, suggests new research that found distinctive hydrocarbons from ancient hearths in a cave inhabited up to 60,000 years ago. The study gives weight to the theory that Neanderthals and other early humans were skilled at making fires, rather than just exploiting natural wildfires.

Although it’s sometimes argued that only Homo sapiens could control fires for warmth, light, cooking and tool-making – a skill known as pyrotechnology – the study indicates otherwise. ‘Our research has strengthened the idea that Neanderthals were able to control fire,’ says lead author Alex Brittingham from the University of Connecticut, US.

It also casts doubt on the idea that an inability to make fires contributed to Neanderthals dying out about 40,000 years ago. ‘At least some Neanderthals had the ability to control fire in the same way that modern humans did,’ Brittingham says. ‘If this behaviour was similar between the two species, there is no reason to believe it led to the extinction of the Neanderthals.’

The researchers studied polycyclic aromatic hydrocarbons (PAHs) in floor sediments at Lusakert-1, a cave in Armenia where Neanderthals lived between 40,000 and 60,000 years ago. Light PAHs, with three or four aromatic rings, disperse in the air and are caused by wildfires, explains geochemist Michael Hren from the University of Connecticut, a co-author of the study.

But heavy PAHs, with five or more aromatic rings, take more energy to create and disperse only a few metres. They are usually caused by burning wood on hot hearth fires – and the researchers found that heavy PAHs occurred independently of light PAHs in the cave. ‘We have people living in this cave, burning fires for food, for warmth … if they were relying on frequent lightning strikes to get fire, then we would have seen a more abundant background fire signal,’ Hren said. ‘We did not see that.’

Instead, they found that heavy PAHs occurred alongside concentrations of Neanderthal artifacts, including charcoal and bone fragments. ‘It really tells us that they were having fires locally.’

Archaeologist Andrew Sorensen from the University of Leiden, the Netherlands, who was not involved in the research, says the technique of studying PAH levels in sediments has great potential for studying other Neanderthal sites, ‘to really get a better idea of what is going on with Palaeolithic fire-use’. But because natural wildfires could be rekindled in hearth fires almost endlessly, this research alone is not final proof that Neanderthals had complete control of fire, he adds.

The mastery of fire by early humans is a hot topic. A 2016 study suggested Neanderthals used powdered magnesium dioxide as a fire lighter, and a 2018 study led by Sorensen proposed that distinctive marks on Neanderthal tools from around 50,000 years ago were evidence of fire-making.

The new technique could also help determine if the use of fire arose more than once. ‘Throughout the archaeological record we see the independent development of different behaviours,’ – including animal domestication, Brittingham says. ‘Pyrotechnology could have undergone a similar process, and may have developed independently in different Palaeolithic populations.’