Neonicotinoid exposure could be harming mammals 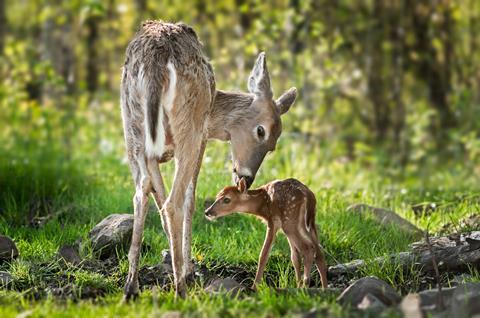 A study on captive deer in the US has shown for the first time that exposure to neonicotinoid pesticides – which have previously been blamed for harming bees – could have a detrimental effect on the health of a large mammal at environmentally relevant concentrations.

White-tailed deer fawns suffered malformations and higher death rates when imidacloprid, a widely used neonicotinoid, was pipetted into their drinking water. Researchers led by Jonathan Jenks at South Dakota State University also showed that when higher levels of the pesticide accumulated in the spleen of the deer, the body weight and survival of fawns decreased.1

Jenks became concerned after reading reports of abnormalities in wild deer in neighbouring Montana, where neonicotinoids are widely used. For example, a 2002 study showed that 70% of a sample of 133 male deer suffered from genital abnormalities, while more than half of 519 white-tailed deer examined between 2001 and 2010 showed facial deformities.3

The team studied 21 captive adult deer, with 24 fawns born in 2015 and 39 in 2016. They administered imidacloprid to their drinking water at concentrations of 1,500ng/L, 3,000ng/L and 15,000ng/L. The low and moderate concentrations reflect levels found in groundwater in the US and Canada. They found that as imidocloprid levels increased in the spleen of treated animals, fawn survival, jawbone lengths, body weight and organ weights decreased. Deer with no neonicotinoids added to their water – the control group – also drank more, which may indicate a dislike of contaminated water in the treated groups.

‘We were not expecting to show the level of the effects that we did, because our concentrations have been found in wetlands,’ says Jenks. Imidacloprid was even present in some of the organs of non-treated deer, suggesting it was present in their general environment. Jenks is concerned that wild deer in North Dakota may be exposed to higher levels of imidacloprid than the low and moderate doses in his experiment. In 2014, over 3.3 million kilos of neonicotinoids were used in the US, with 94% of corn and 50% of soybeans in South Dakota treated with clothianidin, imidacloprid or thiamethoxam.

The impact of neonicotinoids on insects has been widely investigated, but few studies report on mammalian toxicity. A recent experiment infused low doses of imidacloprid into pregnant mice and reported behavioural problems with their offspring later in life.4 ‘Even after the animal was no longer exposed, we still detected altered behaviour in the mice,’ says David Hampson of the University of Toronto, who led the study.

Neonicotinoids were even detected in untreated lab mice. ‘This stuff is everywhere,’ says Hampson, who praises the deer study as ‘first-of-a-kind’. ‘They’ve a weird mixture of results, but they are studying a large animal outside in a pen,’ he notes. ‘A lot different from our controlled lab studies with rats and mice.’ His one criticism is the use of ELISA (enzyme-linked immunosorbent assay) to measure imidacloprid in the animals, since it ‘uses an antibody to detect the pesticide and sometimes there can be cross-reactivity with related chemical structures’. His own study used HPLC mass spectrometry, which he says more accurate.

Last year, the European Food Safety Authority concluded that neonicotinoid pesticides harm bees and accumulate in the environment. EU member states then voted to effectively ban clothianidin, imidacloprid and thiamethoxam from outdoor use. Canada last week announced it will outlaw them starting in 2021.