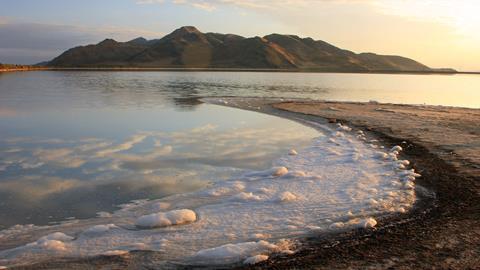 A new family of peptides bearing an unprecedented number of the biologically highly unusual D-amino acids – as opposed to the far more common L-isomer – has been discovered by sifting through the sediment of the Great Salt Lake in Utah in search of for unique bacteria. These salinipeptins are not just an oddity either, they have been found to have antibiotic and antitumour activity.

The Great Salt Lake is also known as America’s Dead Sea, but despite its inhospitable reputation the lake is home to many extremophile bacteria that can survive the exceptionally salty environment. ‘We noticed that the sediments of the Great Salt Lake remained, compound-wise, unexplored,’ says co-author and natural product chemist Jackie Winter. ‘But the sediments are brimming with filamentous bacteria and fungi. Since these organisms have adapted to the lake’s unique saline environment, they produce chemical products that we normally don’t find anywhere else.’

Salinipeptins are a rare kind of peptide produced by a halotolerant Streptomyces species. They feature nine D-amino acids, which are isomerised from their L-amino acid analogues by a series of enzymatic reactions following translation. D-amino acids are almost unknown to life – an analysis of a database of more than 187 million amino acids found only 837 D-isomers. However, Winter says: ‘D-amino acids are not that uncommon in the natural products world. It just happens that ribosomes cannot typically incorporate them in peptides and proteins, so they are usually products of different post-translational modifications.’

D-amino acids make compounds quite attractive for biomedical applications. ‘Bacteria may use these peptides as “chemical warfare agents” against their neighbours to compete for nutrients or space,’ says Winter. Hence, they are potentially very good antibiotics. Moreover, ‘since [D-amino acids] are not usual building blocks, they show some extra stability against rapid metabolism by our proteases’, explains Ben Naman, an associate professor working in natural product research at Ningbo University in Zhejiang, China, who wasn’t involved in this work. ‘D-amino acids have gained attention in recent years, as they may also confer some level of specificity to relevant biological targets,’ he adds. Tests revealed that salinipeptins showed antibiotic activity against several pathogens. They also showed promising antitumour activity against glioblastoma and colon cancer cell lines.

In order to better understand how Great Salt Lake bacteria produce this kind of compound, chemists also carried out a detailed genetic analysis. ‘The use of genomic information here facilitated the structure elucidation,’ Naman says. ‘By comparing this prediction with the observed configuration, they can identify the post-translational modifications.’

Identifying the genes that code for salinipeptin biosynthesis can also help scale-up their production. ‘Since they contain quite a few non-proteinogenic amino acids, these peptides are difficult to prepare by traditional synthetic methods,’ says Winter. ‘Characterising the cellular machinery that nature uses to synthesise this molecules, we can move genes to a more suitable host and engineer a platform that produces higher yields of the desired compounds.’

Winter and her team are now hopeful that they will find more novel natural products in the sediments of the Great Salt Lake. ‘It is an excellent resource for finding new compounds containing new chemical scaffolds,’ says Winter. ‘This could potentially lead to new antibiotics.’