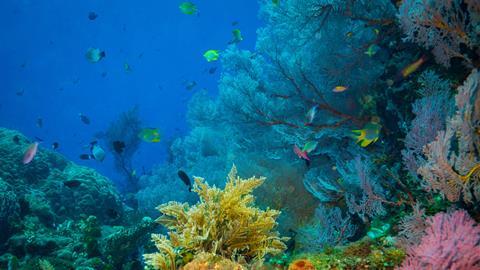 Scientists have identified the structures of two marine natural products that were previously considered too complicated to characterise.1 A combination of well-known spectroscopic tools and new experiments probing orientation-dependant bonding allowed the team to unpick the structures. 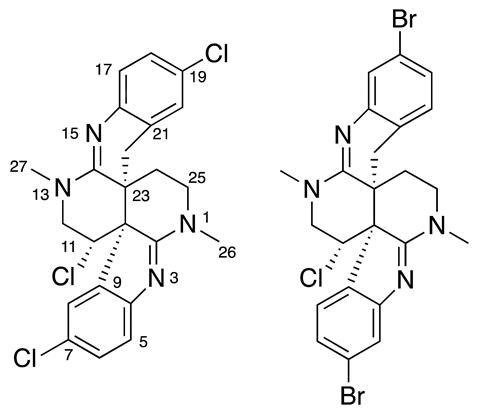 Structures of caulamidines A (left) and B (right)

Natural products are a rich source of pharmacologically-active compounds. The problem is: they are often difficult to purify and identify.

Gary Martin, of Merck Research Laboratories in the US, and Kirk Gustafson, from the US National Cancer Institute, have been studying and characterising natural products for years. ‘There has been a continuing flow of incorrectly reported complex natural product structures into the published literature … at present, there are more than 1200 structure revision papers. Stopping investigators from reporting incorrect structures in the first place will free up their time to pursue and identify new molecular entities,’ they say.

Back in 2000, Gustafson was studying a marine invertebrate called a bryozoan.2 His team isolated and identified a series of cytotoxic compounds from the creature. They also extracted two noncytotoxic fractions, called caulamidine A and B. ‘Spectroscopic characterisation of caulamidine A using the tools available to us back then allowed us to propose a structure, but we did not have definitive proof or sufficient confidence to publish it. Subsequently the sample decomposed so the project stalled at this point,’ explains Gustafson. They tried, and failed, to collect another sample of the compounds for 15 years.

Now, armed with a fresh sample and improved instrumentation and experimental capabilities, a team led by Gustafson and Martin has been able to assign the structures of both caulamidine A and B.

The caulamidines are alkaloids made up of an unusual fused hexacyclic scaffold with several chiral centres. The heterocyclic core is unique with no precedent in the chemical literature and no one knows how to synthesise the compounds, either biologically or synthetically. ‘The caulamidines are really way, way out at the edge of accessible natural product chemical space,’ comments Robert Capon, a natural products expert from the University of Queensland, Australia, who was not involved in this study. ‘That their structures have (at last) been cracked is both a remarkable feat, and a sign that we may need to redraw the boundary on what is and is not achievable when it comes to spectroscopic analysis and structure elucidation.’

Cutting-edge nuclear magnetic resonance spectroscopy (NMR) techniques were the keys that helped unlock the natural product structures. The standard suite of NMR experiments that most synthetic chemists know provided some connectivity information, which the team used to guide computer-assisted structural elucidation (CASE) analysis. This takes information from NMR experiments and suggests possible molecular structures that fit the data. Initially, the software ran for 250 hours without a single suggestion.

The breakthrough came when the team used a couple of newer NMR experiments, one of which was recently developed by Williamson, Martin and other colleagues at Merck Research Laboratories.3 It looked at long range proton–carbon interactions over four to six bonds, where normally NMR spectroscopy is limited to looking at information over two to three bonds. With this new data the CASE analysis ran for less than a second and proposed two possible structures for caulamidine A.

The final step was to independently verify the overall correctness of the proposed structures. To do this, Martin and Gustafson looked at two anisotropic NMR parameters. Anisotropic NMR phenomena can be observed when molecules are not allowed to tumble randomly in a solution, for example by partially aligning them in the NMR magnetic field using a stretched polymer gel. Anisotropic NMR data can provide information on relative orientations of different structural units, such as carbon–hydrogen bonds, regardless of the distance between these units. Therefore, they are complementary to the more commonly used NMR experiments that provide local structural information.

Residual dipolar coupling (RDC) is an anisotropic NMR parameter that chemists have used for decades, but the residual chemical shift anisotropy (RCSA) has only recently become feasible to measure. By using both the RDC and RCSA data together and comparing with theoretically calculated values, the team identified the single correct structure of caulamidine A. They also found that the second compound, caulamidine B, was very similar to caulamidine A but with different halogen atoms attached to the backbone. Both look to have some antimalarial properties, despite being noncytotoxic.

Martin and Gustafson say this study represents the first application of RDCs and RCSAs in tandem to provide orthogonal confirmation of the constitution and configuration of a previously unknown natural product structure. They say that RCSAs in particular are relatively simple to acquire, even for non-experts, so researchers shouldn’t be afraid to try the experiments out for themselves. ‘While continued reliance on methods that have been in use for many years is fine, there comes a point beyond which older techniques are no longer fully capable of addressing complex structural assignment questions. We are convinced that anisotropic NMR spectroscopy has the potential to be a game-changer in the definition of organic chemical structures.’