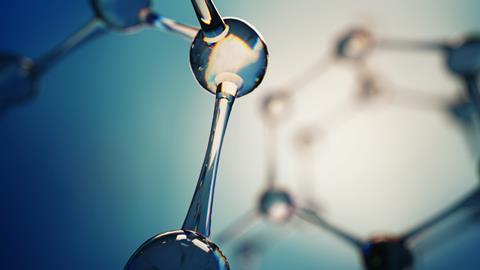 Using detective skills that would make Hercule Poirot proud, researchers in the US have solved a longstanding mystery around the absolute configuration of natural product (+)-frondosin B.1

(+)-Frondosin B is part of a family of marine sesquiterpenes found in underwater sponges that exhibit anti-inflammatory properties and have potential applications in anticancer and HIV therapy. Starting with Samuel Danishefsky’s route in 2001,2 there have been 5 total syntheses of (+)-frondosin B. However, due to a discrepancy in the optical rotation of the final product during Dirk Trauner’s 2002 synthesis,3 which was observed to have S rather than the expected R configuration, there has been a fierce debate in the synthetic community about the true stereochemistry at C8 in the natural product. After more than decade of attempts by synthetic organic chemists to explain this, particularly focused on different inversion processes, no definitive answer had arisen. 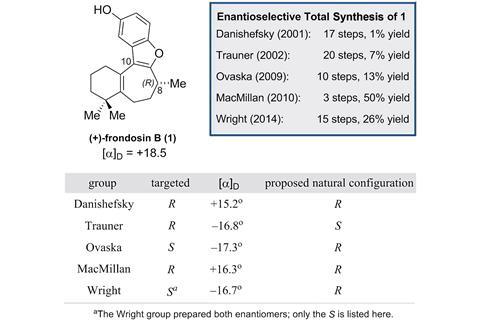 Summary of the enantioselective frondosin B syntheses reported to date

Now, a team led by analytical chemist Leo Joyce and synthetic chemist Christopher Nawrat, at Merck & Co, US, has harnessed a toolbox of analytical spectroscopies to finally resolve the issue. Through a combination of computational techniques, IR, vibrational and electric circular dichroism (VCD and ECD) and NMR, they analysed the configuration of the final product and then the routes used to synthesise frondosin B.

‘The take home message is that it’s important to use all of the tools that have been developed, from chromatography, NMR to circular dichroism in order to solve these problems,’ comments Joyce. Nawrat continues ‘after a few hours of data acquisition we knew the product was R, but what took us a lot longer to work out was exactly where everyone else went wrong. We didn’t just want to add to the noise of the existing literature. What we really wanted was an explanation.’

Their detailed analysis ruled out the suggested inversion process and discovered that the apparent error in the optical rotation was due to a minor impurity that arose at a late stage in the synthesis; an impurity that had a large negative rotation versus the small positive value of (+)-frondosin B itself, creating the illusion of the product being the S enantiomer.

Prasad Polavarapu from Vanderbilt University, US, whose work involves unpicking the structures of organic molecules, says using optical rotation as a reliable source for deducing stereochemical pathways or enantiomeric purity is a serious misuse of enormous consequences. He goes on to add that this work should be ‘an eye-opener not only for synthetic chemists at large, but also for those interested in stereochemical assignments.’ Polavarapu agrees with the researchers assertion that synthetic chemists should use the full ensemble of analytical tools to assess achiral and enantiomeric purity and feels that this should ‘form a core principle for current day scientific training.’

Joyce and Nawrat have already worked on other collaborations with synthetic chemists and also hope that the methodology and analytical techniques used in their work will be adopted more widely. As Nawrat puts it, ‘If we can just get to the point where people in the community are aware this exists and is there to turn to, then we’ll really have achieved something.’