On the brink of a damaging departure from EU research 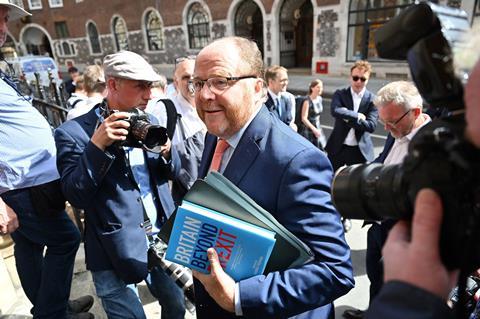 Former science minister George Freeman will not be returning to government after resigning earlier in July. This is despite political wrangling putting the UK on a path that will see it crash out of the EU’s huge research programmes

To do their jobs properly, scientists need stability. They need secure sources of funding. They need to be able to collaborate with other researchers across the globe, without unnecessary barriers.

But there’s a huge question mark hanging over the UK’s involvement in major scientific programmes like Horizon Europe – the world’s largest multinational research fund. UK participation in the EU’s research frameworks was agreed during Brexit negotiations in December 2020. But full association was never rubber stamped, and it won’t be as long as the UK government continues threatening to backtrack on the Northern Ireland protocol – the trade deal it struck with the EU to avoid creating a hard border on the isle of Ireland.

The situation has brought 19 months of uncertainty for the country’s scientific community. More than 100 UK-based researchers who chose not to relocate to institutions in EU-member states recently had prestigious European Research Council grants terminated. Many other talented young researchers are actively seeking positions at European institutions. Universities UK has warned that UK scientists are being forced to leave major research consortia, noting that ‘the situation is deteriorating every day that the uncertainty drags on’.

George Freeman, who became the seventh science minister in under five years to leave the post when he resigned earlier this month, spent countless hours arguing the case for UK association to Horizon. But little progress has been made, and it’s difficult to gauge how much backing Freeman ever really had from his own colleagues in government.

In recent months, as it has appeared increasing likely that the UK will be ejected from Horizon, Freeman started work on a ‘plan B’ to replace the funds that scientists would lose access to. Any domestic scheme will very much be second best, lacking the opportunities that come from established international networks (just ask the Swiss researchers who have spent the last year frozen out of the EU’s research programmes following a similar political spat). And before he resigned, Freeman spoke openly about the struggle he was facing to get the Treasury to support the plan.

The initial plan B proposals have just been published by business secretary Kwasi Kwarteng, but they still appear vague and uncosted. UKRI described the publication as ‘just the start of understanding’ how UK researchers might participate in important global projects after exiting Horizon, while the Royal Society stressed the ‘need to see full detail’ for how the government will finance the plan.

With Boris Johnson a lame-duck prime minister – and neither of his potential successors having said anything to suggest that they will reverse policy on Northern Ireland – the only thing that seems certain is that there will be many more weeks of uncertainty before UK science gets the answers it is looking for.