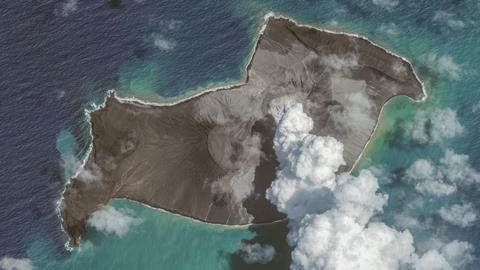 One year on from massive eruption in South Pacific, the atmosphere is still feeling the effects

In mid-January last year, the underwater Hunga Tonga-Hunga Ha’apai volcano erupted, sending masses of seawater and volcanic material high into the atmosphere. It was the most powerful volcanic eruption in almost 140 years and extraordinary satellite images captured the huge ash plume and shockwave triggered by the blast.

A tsunami up to 20m high killed at least four people in nearby Tonga, with the South Pacific island nation also blanketed in a thick layer of ash. Further effects were felt all along the Pacific rim, with another two people killed by waves as far away as Peru. The blast was even detected by seismometers 18,000km away.

One year on, the huge volume of material injected into the air is continuing to affect our planet’s atmospheric chemistry.

The plume created by Hunga Tonga reached 58km into the sky – smashing the record of 35km set by the 1991 eruption of Mount Pinatubo. That makes it the first eruption that we know of where the top of the plume rose beyond the stratosphere and into the mesosphere.

In the aftermath of the eruption, numerous groups began analysing the chemical make-up of the plume. Balloon-mounted instruments and satellite monitoring systems were all used to track sulfur dioxide, sulfate aerosols, ash and water vapour blown skyward by the blast. Understanding the contents of the plume, and the interactions between the different chemical species provides important information on how the event could affect the ozone layer and climate change.

In the case of Hunga Tonga, the water content of the plume was far larger than other eruptions, with huge amounts of seawater vapourised as it came into contact with hot magma. While many underwater volcanoes exist, Hunga Tonga was unique due to the size of the blast and its location just 150m below the surface of the sea. Much of the material emitted by deeper lying volcanoes remains trapped underwater, whereas Hunga Tonga’s plume was able to burst out.

The enormous water content of the plume meant that in the days that followed the eruption, satellites initially struggled to monitor what was happening. This was because the instruments were never built to measure such vast quantities of water, explains Colorado-based researcher Holger Vömel from the University Corporation for Atmospheric Research.

In the aftermath of the eruption, Vömel explains that colleagues from the US National Oceanic and Atmospheric Administration organised a rapid response field campaign as the plume passed over Reunion Island in the Indian Ocean. ‘Exactly a week after the eruption, they were able to launch a number of balloons to measure water vapour, ozone, SO2, particles big and small. Right as the plume was coming over the station, I saw the water vapour soundings, and immediately I saw this is a gigantic event,’ says Vömel. ‘Normally we talk about five parts per million, this was 350 parts per million. We get excited when there’s variations of five or 10% – here there’s a factor of 80. So this was absolutely huge.’

With this data, Vömel and his colleagues gave a ‘conservative estimate’ that Hunga Tonga injected at least 50 million tonnes of water into the stratosphere. This represents an increase of 5% in the stratosphere’s total water content.

Since then, satellite data has revealed that the amount of water injected into the stratosphere by the eruption was likely even higher. One of the most important satellite instruments that has tracked the plume in the year since the eruption is the microwave limb sounder (MLS) on board Nasa’s Aura satellite.

‘It surprised us at the beginning, because the magnitudes [of water vapour] were so big – I’m talking about more than 100 standard deviations of what we normally see,’ says Luis Millán, a researcher at Nasa’s Jet Propulsion Laboratory at the California Institute of Technology. But as the MLS continued to track the plume over the following months, Millán and his team were able to verify the data. They estimate that around 146 million tonnes of water was injected into the stratosphere. ‘We’ve never seen anything like it in decades of water vapour observations,’ says Millán.

The unprecedented water content of the Hunga Tonga plume has a number of implications. The first is that it could explain another observation made by scientists tracking the event: the seemingly low sulfur dioxide content.

‘In the eruption column directly over the volcano, the entire stratosphere was probably saturated,’ says Vömel. ‘So you have a lot of ice particles in there and they can certainly wash out a lot of SO2. So there’s another very, very interesting research topic: what happened – was there not a lot of SO2 coming out of the volcano, or was there a lot and it was all washed out?’

Another process that contributed to the low quantities of SO2 detected after the eruption, is its rapid conversion to sulfate aerosols – again, driven by the large water content of the plume. Usually this process takes several weeks, but in the case of Hunga Tonga it seems to have happened much faster.

‘Because of the amount of water in the plume, SO2 was oxidised to sulfuric acid and then sulfate aerosols very quickly,’ says Pasquale Sellitto, an atmospheric scientist based at the Pierre Simon Laplace Institute in France.

Using radiosonde and satellite data, Sellitto’s team has modelled the radiative impact of the Hunga Tonga plume. In the immediate aftermath of the eruption, they noted a cooling effect due to the sulfate aerosols in the plume. But over time, the sulfates produced by the eruption have fallen in altitude, and researchers have observed a separation of the sulfate layer, below the water vapour layer. Now water vapour is dominating the radiative effects, meaning a net warming of the climate system. The volcano is actually predicted to increase the chance of the Earth warming by 1.5 °C overall during the next five years by 7%. ‘This one was a warming volcanic eruption – I’ve never seen something like this, there’s nothing in the literature about that,’ says Sellitto. ‘All eruptions produce some transient cooling of the climate system. This one was warming the climate system.’

The warming effects of Hunga Tonga’s water plume are likely to last for a few years, and researchers are keen to gain as much information as possible as it continues to spread around the globe. However, the MLS instrument that has provided the most detailed picture of the plume’s movements is likely to be turned off this summer, having already circled the planet for 18 years.

According to Vömel, there are no other instruments that can provide data that compares to the daily maps provided by the MLS, and there is a risk that atmospheric scientists could ‘become quite blind to what happens to the plume’. Talks are ongoing on whether to extend the Aura satellite’s life by up to two years, and Vömel hopes those involved will take this option so that the MLS can continue to operate.

‘Two more years is big, because in two years most of the aerosols will have probably gone,’ he says. ‘And water vapour will have homogenised mostly – how much will have left the stratosphere? I don’t know.’

‘If [Hunga Tonga] had erupted next year and MLS would have not been there, oh my gosh, what a huge loss,’ he adds. ‘We were able to see at least the first year of it … but still, we need to see the whole of how it peters out for as long as we possibly can – this is such a unique once in a lifetime event.’