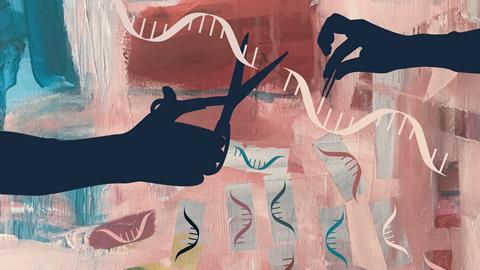 The US Patent and Trademark Office (USPTO) has potentially wrested control of the Crispr-Cas9 gene editing technology’s use in people away from the scientists best known for inventing it. Emmanuelle Charpentier from the Max Planck Institute of Infection Biology in Berlin, Germany, and Jennifer Doudna at University of California, Berkeley, US, lost out in a decision on 28 February 2022. As such, the companies closest to commercialising Crispr-Cas9 gene editing in treating disease now face the prospect of needing further, potentially expensive, patent licences.

The decision relates specifically to using Crispr-Cas9 use in eukaryotic cells, including those of plants and animals. The USPTO’s Patent Trial and Appeal Board (PTAB) decided that claims in 14 patent applications from Doudna and Charpentier’s group are unpatentable. That’s because Feng Zhang’s team at the Broad Institute in Cambridge, US, had developed a system that worked in such cells first.

In 2012, Doudna and Charpentier’s team demonstrated, and initially patented, Crispr-Cas9 using isolated biochemicals, rather than in whole cells. The pair were awarded the 2020 Nobel prize in chemistry for the discovery. Both they and Zhang’s group were working to extend the system into eukaryotic cells, and both filed patents in the US.

When Zhang’s patent was granted, the UC Berkeley group attempted to invalidate it on the basis that it was an obvious extension of their patented, non-cell-based work. However, in 2017, the USPTO decided that because Zhang’s team specifically focused on eukaryotic cells, the inventions didn’t interfere and both patents could stand. 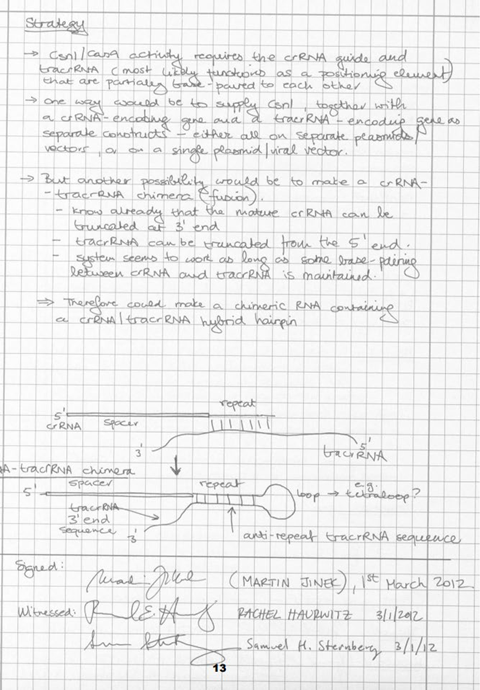 Martin Jinek’s lab book from 1 March 2012 lays out a concept for Crispr-Cas9’s use in mammalian cells, but this was insufficient to convince the US Patent and Trademark Office to overturn Feng Zhang and the Broad Institutes existing patent on the subject

At the time, the USPTO assigned ‘priority dates’ for patent rights based on who was first to conceive a technology and deliver it, or ‘reduce it to practice’. In March 2013 it changed to assigning them based on who filed a patent application first. It assigned a 12 December 2012 priority date to the application from Zhang and the Broad Institute. UC Berkeley’s filings relating to Crispr-Cas9 in eukaryotes have a priority date of 28 January 2013. Therefore, if Zhang’s original patent stands, it takes priority over Doudna and Charpentier’s subsequent applications covering Crispr-Cas9 editing in cells.

In the most recent dispute, UC Berkeley had argued that its researchers had conceived of using Crispr-Cas9 in eukaryotic cells on 1 March 2012. It argues that the researchers had reduced it to practice by 9 August 2012. The 84-page decision document includes pages from Doudna’s team-member Martin Jinek’s lab book from 1 March 2012, where he lays out a concept for using Crispr-Cas9 in mammalian cells. However, the PTAB ruled that the group ‘fails to provide sufficient, persuasive evidence of an earlier reduction to practice or conception’.

As such, the Broad Institute patent stands and the UC Berkeley group’s 14 patent applications ‘will not be granted’, UC Berkeley admitted in a statement. The group ‘has more than 40 issued US patents that were not involved’ in this process, covering all environments, including eukaryotic cells. ‘The 13 patents and one patent application owned by Broad remain under challenge,’ the statement adds. UC Berkeley is considering options to appeal this decision.

However Jacob Sherkow, a biotech intellectual property expert at the University of Illinois at Urbana-Champaign, US, says that some of the UC Berkeley group’s patent claims may now be questioned. The decision will not affect academic researchers using Crispr-Cas9 technology much, Sherkow adds. That’s because the Broad Institute and UC Berkeley provide Crispr tools and some intellectual property freely for non-profit use.

The Broad Institute’s priority for eukaryotic cell editing practically and financially affects companies commercialising Crispr-Cas9, though. Cambridge, US-based Intellia Therapeutics and Crispr Therapeutics in Zug, Switzerland, were likely seeking a different decision, Sherkow says. That’s because they both have licences to the UC Berkeley’s patents, but not the Broad Institute’s.

In a public statement, Intellia expressed its disappointment. ‘Intellia does not expect the PTAB’s ruling to impact its ability to discover, develop, or commercialise future Crispr-based medicines,’ it says.

Sherkow disagrees, however. ‘This decision really cements the need to get a licence from the Broad Institute to commercially develop Crispr-Cas9 products,’ he says. The Broad Institute would probably grant licences to both companies, Sherkow says. ‘These are the farthest along among the major players in terms of clinical trials for Crispr-Cas9 therapies,’ he explains. Both companies are more advanced than Broad’s main licensee, Editas Medicine, he says. As such, the Broad Institute would likely welcome income from licensing patents to companies selling products for a ‘single digit royalty on net sales’, Sherkow suggests.

While this latest decision is potentially significant, many legal battles over Crispr-Cas9 rage internationally. UC Berkeley and Broad are each also involved with ongoing proceedings against South Korean biotech company Toolgen, and separately also against multinational chemical supplier Sigma-Aldrich. Meanwhile, in Europe, UC Berkeley has benefited from a technical error that delayed the priority date for a key Broad Institute patent.

Yet the evidence revealed in this decision dispels any doubt that Doudna and Charpentier’s team invented the basic Crispr-Cas9 technique, Sherkow adds. ‘It is almost philosophically impossible to get a clearer picture of the date and moment of conception of a monumental piece of technology,’ he says.