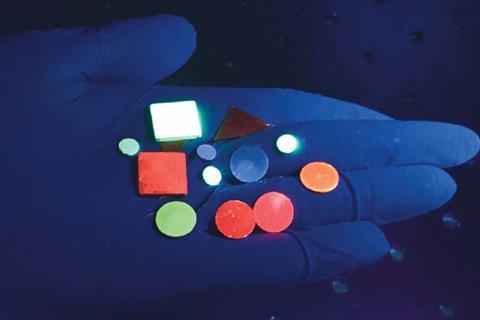 Researchers have stabilised a perovskite’s luminescent crystal form, which usually decomposes rapidly at temperatures below 320˚C, by freezing it inside a metal–organic framework (MOF) glass. Moreover, the material’s emission can be tuned to any colour on the visible spectrum through small changes to its synthesis.

Perovskites’ remarkable properties have attracted researchers working on solar cells and LEDs: charge easily flows in and out of them, and a direct band gap means electrical energy is easily converted to light and vice versa. Small chemical modifications change this band gap can be changed – altering the colour of light emitted or absorbed.

There are, however, a myriad of problems: some perovskites recrystallise from optically active polymorphs to inactive ones when the temperature changes, and ‘across all halide perovskites it’s a perennial problem to be unstable to light or to moisture or to air,’ says Sean Collins from the University of Leeds, UK. Several teams have attempted to encapsulate perovskites, but forming robust host matrices without damaging the delicate material has proved tricky.

Collins and collaborators have now managed to stabilise caesium lead iodide by encapsulating it in a zeolitic imidazolate framework (ZIF) glass. ‘[ZIFs] are structurally analogous to zeolites, but their chemistry is derived from the MOF world,’ explains Thomas Bennett from the University of Cambridge, UK, who co-led the study. The researchers mixed 25% perovskite into ZIF-62 powder before sintering the mixture and quenching the resulting glass with liquid nitrogen. 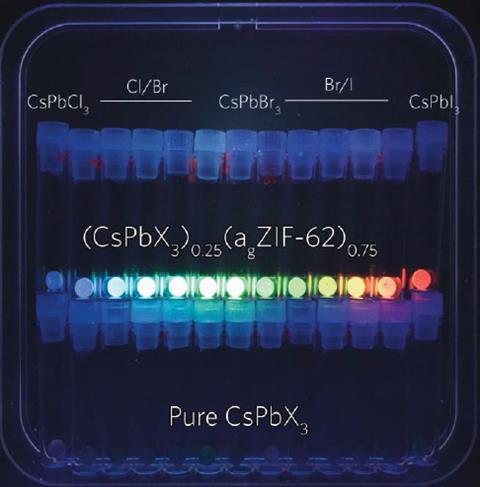 MOF encapsulation keeps the perovskite in its luminescent form, while changing the halide ion and adjusting the temperature during synthesis allows the researchers to fine-tune the composite’s emission colour

Caesium lead iodide holds particular optical promise in its perovskite black phase but converts to an optically inactive, non-perovskite yellow phase below 320˚C. ‘After we put the two materials together we found that we could freeze the high temperature phase under room temperature,’ explains the study’s co-leader Jingwei Hou from the University of Queensland in Australia.

Raising the sintering temperature shifts the material’s emission from orange to red because of quantum effects that result from small particles agglomerating. Other emission wavelengths are accessed by switching the halide ions between iodide, bromide and chloride.

The encapsulated perovskites are stable under ambient conditions, immersion in water and laser irradiation. Hou’s group is now working to fabricate perovskite LEDs using the material. ‘Perovskite LEDs should give you much purer colour than LEDs used today, which would give you way more contrast and allow them to be used in displays,’ says Hou.

‘It’s quite interesting; it would even be more interesting if they’d made a device’ comments materials scientist Yang Yang of the University of California, Los Angeles, US. ‘I’m not sure how you would integrate this into a device using current methods.’

Tianyi Huang, PhD researcher in Yang’s team, adds that, when using device-scale encapsulation, scientists depend on defect-free surfaces to avoid penetration by oxygen or water. ‘The unique part of this [study] is that they put the encapsulation on the scale of nanocrystals with this hollow structure, and I think that’s why they achieve such good stability,’ Huang says.