Highly efficient solar cells and catalysts made from cheap, common materials use sunlight to split water 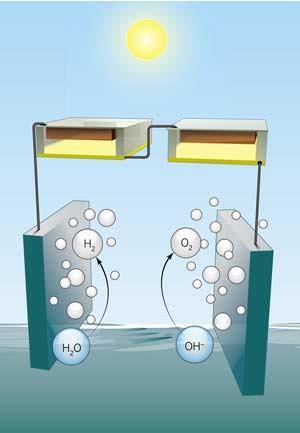 The perovskite cells and catalysts were made from cheap, abundant materials, which should keep their costs down

A new, highly efficient process for splitting water into hydrogen and oxygen has been demonstrated by researchers in Switzerland. The process combines a stable catalyst with a highly efficient perovskite solar cell. The perovskite solar cells do have a major drawback in that they breakdown after a few hours, but the researchers believe further advances in solar cell technology should take care of this problem.

As the most abundant energy source on the planet, solar energy is extremely attractive for weaning the human race off fossil fuels, but making the switch is problematic. The energy captured has to be stored until it is needed and, as the most abundant solar resources are often where few people live, a way needs to be found to transport it to people’s homes and businesses. One option is to use solar power to split water into hydrogen and oxygen. However, for this process to be efficient, two things are needed: a catalyst that can lower the activation energy barrier of splitting water enough to allow the reaction to proceed at a sufficient rate and a photovoltaic cell that provides sufficient voltage to surmount this energy barrier.

Conventional solar cells use silicon as the photovoltaic material. As silicon is relatively cheap, the raw materials for such devices are inexpensive. However, silicon is an indirect band gap semiconductor, which makes it an inefficient absorber of light and means a thick layer is required. Such a thick layer cannot be deposited from solution so has to be cut from a wafer. This makes silicon solar cells quite expensive to assemble, although prices have dropped drastically with automation. Furthermore, the open circuit voltage, the potential difference generated between the positive and negative electrodes when they are not connected together, of a traditional silicon solar cell is limited to about 0.75V or less, which means three or sometimes four such cells need to be connected in series to drive the water splitting process. This reduces the efficiency of the process and increases the cost. Newer, more expensive solar cells, such as those made from several stacked junctions, can address this problem, but they too add to the cost of the process.

Perovskite solar cells were first unveiled in 2009 and have been the subject of intensive research ever since. As the perovskite material has a direct band gap and therefore absorbs light much more efficiently, only a thin layer is required and the solar cells can be solution processed, reducing production costs. In the new research, Michael Grätzel and colleagues at the Swiss Federal Institute of Technology in Lausanne unveil a water splitting device containing a state-of-the-art perovskite solar cell using CH3 NH3 PbI3 as the active material. The cell has an efficiency of 17.3% and an open-circuit voltage of over 1V, meaning that just two cells connected in series can provide sufficient voltage to split water. At present, the perovskite solar cells have very poor stability and start to breakdown after a few hours. Lead author Jingshan Luo says some progress has already been made stabilising these cells though.

The researchers combined these new solar cells with a highly efficient water splitting catalyst, first demonstrated by Hongjie Dai’s group at Stanford University in the US, comprising a nickel–iron layered double hydroxide. Dai’s group first demonstrated this material as a catalyst for the oxygen evolution reaction at the anode, and Luo prepared the catalyst for this purpose. However, he discovered by chance that the material also catalyses the hydrogen evolution reaction at the cathode extremely well, thereby removing the need for a second catalyst and increasing the potential cost efficiency of the cell.

John Turner of the US National Renewable Energy Laboratory in Colorado says that several groups, his own included, have used photovoltaic technology to split water. The novelty here, he says, lies in the use of perovskite solar cells. But, he concludes, ‘there’s a lot of research to be done before the perovskite cells can even come close to realising what their promise might be’.