An electronic sensor for real-time monitoring of drug molecules in the blood has been demonstrated in rats as they go about their day-to-day business. Soon it could continuously guide drug dosing in humans by monitoring drug metabolism or organ function. 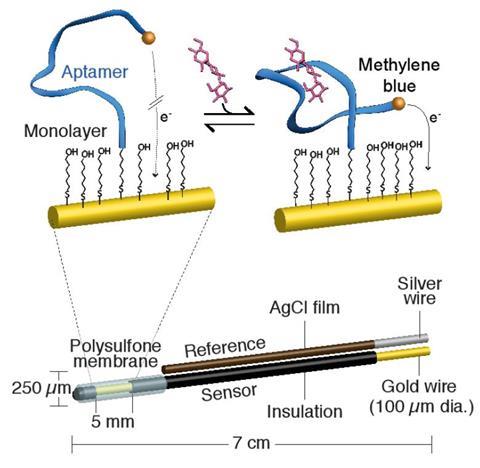 Electronic aptamer sensors translate molecular recognition by a designed molecule of DNA or RNA into a specific, easy to read electronic output. Early examples developed in the laboratory of Kevin Plaxco at the University of California, Santa Barbara, US, are surprisingly simple to build and use, as the development of a sensor for cocaine demonstrated. In their ambition to develop the sensors into devices for personalised medicine, however, the researchers hit a major problem: while the sensors work with serum, whole blood tends to foul up their molecular sites.

Colleagues from the engineering department of UC Santa Barbara developed a sophisticated fix for the problem: a laminar flow sheath passing above the sensor architecture, which allows small molecules through but washes blood cells away. Thanks to its exceedingly small sample requirement, the resulting device could continuously monitor blood, even though the small volume of blood it uses has to be diluted and discarded. It is thus an ex vivo rather than an in vivo monitoring device.

Now, Plaxco and colleagues have come up with a further, improved version of their sensor that for the first time works continuously in vivo in active, mobile rats. The crucial piece of innovation this time is a polysulfone membrane with pores 0.2μm in diameter, which successfully keeps the blood cells away from the sensitive sensors, without getting clogged up itself. As in the earlier version, the small molecules reaching the sensor bind to the aptamer, trigger a conformation change, which in turn causes an electrochemical change that is recorded as an electronic signal. In the laboratory version, the signal is passed through a wire contained in a leash, but in advanced medical versions this communication could be wireless.

With these fixes in place, the group showed that the new sensor can be implanted into live rats and continuously monitor the concentration of substances like the cancer drug doxorubicin or the antibiotic kanamycin. Clinical trials will have to prove its usefulness for monitoring drug dosage in human patients, but also in monitoring organ function.

‘The ability to monitor pulmonary function in real time by monitoring blood oxygen has had a significant impact on medicine,’ Plaxco tells Chemistry World. ‘We’d like to extend such real-time monitoring to other organs, such as the continuous measurement of bilirubin and creatinine as a means of monitoring liver and kidney function.’

Robin Felder from the University of Virginia at Charlottesville, US, welcomes the advance, commenting that ‘continuous improvements in aptamer chemistry and biosensor engineering promise a truly bright future for personalised medicine’. He points out that in future implementations, such sensors could even have access to body fluids without the need to penetrate the skin. His lab is helping to develop such sensors to be stowed in tear ducts.