Put that in your pipe and smoke it

A method to recycle the common plastic polyethylene terephthalate (PET) from fizzy drinks bottles into membranes for filtration, including cigarette filter tips, has been developed by scientists in Sweden and the US. The process involves dissolving PET in a solvent mixture of trifluoroacetic acid and dichloromethane, which is then electrospun to produce fibre mats to be used as filters. 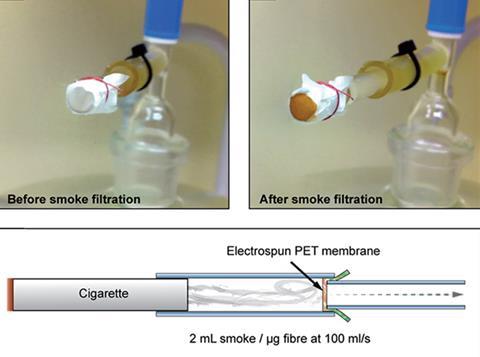 PET is widely recycled into engineered plastics, automobiles, fleece fabric, containers and films, however some applications such as protective clothing and membrane separation and filtration still use the more expensive virgin PET. This work, which stemmed from a collaboration between researchers at the KTH Royal Institute of Technology in Stockholm and the University of Illinois, and led by Richard Olsson and Mikael Hedenqvist, provides a proof-of-concept for synthesising filters from recycled PET to give cigarette filters which absorb up to 20 times more cigarette smoke than classic filter tips.

Materials scientists have praised the work. Witold Brostow from the University of North Texas, US, says the researchers have attacked two problems: ‘What to do with waste from PET bottles, and also how to mitigate effects of cigarette smoke on innocent bystanders who do not smoke. One innovative and viable solution to both problems has been provided.’ ‘PET recycling is a success story for reusing plastics’, says Julius Vancso from the University of Twente in the Netherlands. ‘It is good to see that recycled PET has found applications in obtaining electrospun mats, used here in cigarette filters.’

Team member Richard Andersson would like to expand the research, and ‘investigate if you can tune the properties of the membranes by altering the solvents, spinning conditions or maybe the temperature’. He goes on to add that the solvents they used in this study are quite aggressive because PET is known to be very chemically resistant to normal solvents so ‘maybe there are other ways of doing this that are more environmentally friendly’.