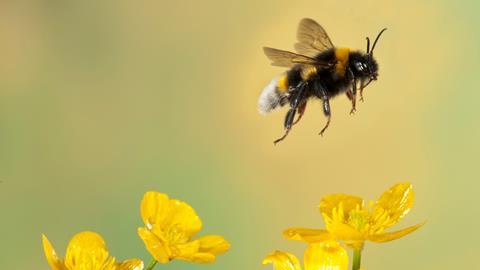 Feeding bees an antidote packaged inside pollen-like particles can rescue them from pesticide poisoning, according to research by scientists in the US.

The pesticides sprayed on crops to control harmful insects are high on the list of the many challenges facing pollinators like honeybees and bumblebees. One particular group of insecticides, the organophosphates, are a major threat – they account for more than a third of insecticide sales worldwide and are highly toxic to bees.

‘We wanted to develop a strategy to detoxify managed pollinators and found we can do it by incorporating it into their food,’ says Minglin Ma, a biomaterials engineer at Cornell University, US, who led the study.

Phosphotriesterases are enzymes that can break down organophosphates and render them harmless. But they don’t work well in the acidic digestive tract of bees. Ma’s team developed a way to package the enzyme inside particles that mimic pollen in their size and shape, and can survive in the bee’s gut to counteract the insecticide.

The 8μm-diameter particles are made of calcium carbonate – chalk – and a gelatin additive, which helps control their size. Calcium carbonate is both easy for the bees to consume, and easy and inexpensive to produce in large quantities. The salt’s acid-scavenging capability protects the enzyme against acidic conditions. When pesticides are released from ingested pollen, they pass through the microparticles’ pores and are removed by the phosphotriesterase within. 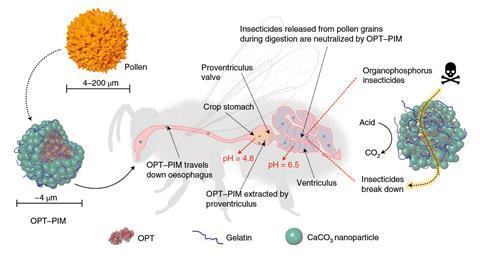 The pollen-like microparticles (PIM, blue) protect the encapsulated phosphotriesterase (OTP, red) from gastric acidity so it can break down insecticides released during pollen digestion

The team fed microcolonies of 50 bumblebees pollen contaminated with the organophosphate insecticide malathion. Bumblebees that were fed the phosphotriesterase alone, or a sugar syrup control, all died after a few days. But the bees that were given the microparticle-packaged antidote survived.

Ma says it should be easy to roll out the antidote-infused microparticles to quickly protect or rescue managed colonies of honeybees. ‘It can be mixed with whatever you feed the bees, a pollen patty or liquid syrup, and used as a dietary supplement,’ he says. He and his colleagues have already launched a company, Beemunity, to commercialise the product.

But Dave Goulson, an insect ecologist at the University of Sussex, UK, wonders how this strategy could be expanded beyond managed hives to the wild bees that often play a much more important role in pollination. ‘I’m somewhat dubious as to how wild pollinators could be induced to consume these particles,’ he says. And he is concerned that the availability of an antidote might be seen as an excuse to be more liberal with malathion and other chemicals that are highly toxic to all life, including humans.

Ma says they have not yet figured out a way to apply the antidote in a way that will help wild pollinators. The team is looking into whether they could take advantage of some kind of flavour or other feed preference that would attract wild bees - while not also attracting and treating the harmful insects that the pesticides are targeting. ‘If we could do that it would be hugely impactful,’ says Ma.