Primitive microbe may offer a hotbed of methane

Microbe digests complex compounds from coal and turns them into methane

A microbe that can digest complex organic compounds from coal and turn them into methane has been unearthed in coal deposits in Japan. The discovery could eventually help industry to access more subsurface methane. 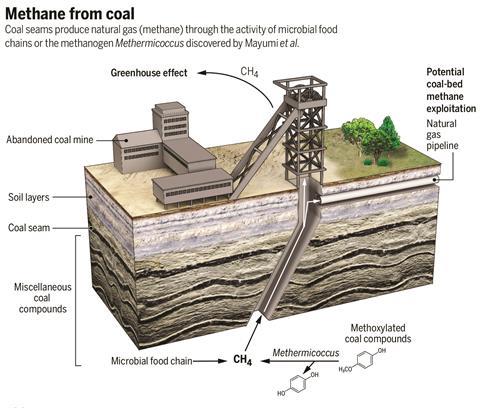 Although coal still remains in demand, underground seams also produce natural gas in the form of methane. In 2014, it was estimated that 50 trillion m3 of subsurface methane came from coal deposits worldwide. One reason for these vast reservoirs of gas is microbial digestion.

Coal typically gives off a range of unreactive methoxylated aromatic compounds (MACs). Primitive microbes, archaea, have a hard time metabolising them and break them down and rely on them being passed down a long microbial food chain. ‘Large organic molecules are degraded by a variety of bacteria to produce small molecules including hydrogen, carbon dioxide, acetate and methanol,’ says Susumu Sakata from the National Institute of Advanced Industrial Science and Technology.

He explains that only then can certain archaea, methanogens, digest these simple molecules to produce methane. But there are no known methanogens that can directly turn MACs into methane. Sakata and his colleagues have managed to dig up the first.

The team extracted several microbial strains from an oil reservoir in the Yamagata Prefecture – an area of Japan known for its vast coal beds. Each methanogen was cultured in a commercially-available MAC solution and incubated for nine months. Sakata’s group then measured methane levels using gas chromatography.

Out of the 10 microbes, two strains of the methanogen Methermicoccus shengliensis could directly breakdown up to 35 MACs to produce methane. ‘The methanogen is so impressive by its capability of using MACs (quite complex compounds for food of regular methanogens) and mode of metabolism – both of which are distinct from those previously known for a large number of methanogens,’ says Sakata.

Sakata explains this could change how we look at the global carbon cycle, but talk of finding new methane resources in the hills may be a bit premature. ‘Whether or not this kind of microbe helps to access untapped methane resources depends on the ubiquity and in situ activity of such methanogens in subsurface environments,’ he comments.

‘Generation of microbial gas and its significance in the total coal-bed methane portfolio is unquestionable, but typically consortia of bacteria and methanogens are required to convert coal material into gas,’ says Maria Mastalerz, a coal geologist from Indiana University Bloomington, US. ‘This [research] demonstrates that methanogens alone can accomplish this.’