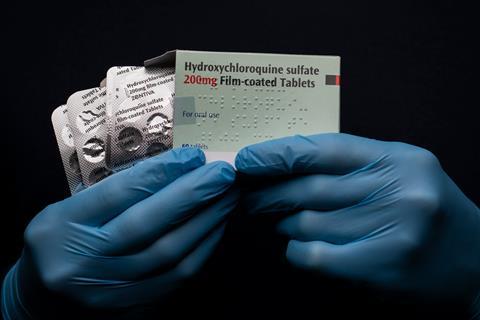 The International Society of Antimicrobial Chemotherapy (ISAC) has distanced itself from a recent study published by its own journal, which suggested that an existing malaria drug could treat Covid-19 effectively.

The study has attracted a lot of attention thanks to US president Donald Trump citing it as a basis for promoting hydroxychloroquine to treat Covid-19 patients. On 29 March, the US Food and Drug Administration granted emergency approval for hydroxychloroquine to be used for some patients hospitalised with Covid-19. Hydroxychloroquine is typically used to treat people with malaria, rheumatoid arthritis and lupus, and preliminary reports of its effectiveness against Covid-19 has led to shortages for patients reliant on these drugs.

Now, the board of ISAC, which publishes the International Journal of Antimicrobial Agents in collaboration with the Dutch publisher Elsevier, is saying the study does not meet the society’s expected standards. On 3 April, ISAC president Andreas Voss, who is a clinical microbiologist at the Radboud Institute for Health Sciences in the Netherlands, released a statement noting that the society’s board members had reservations about the study ‘especially relating to the lack of better explanations of the inclusion criteria and the triage of patients to ensure patient safety’.

The study was originally published as a preprint on medRxiv on 16 March, accepted for publication on 17 March and published in the journal on 20 March. This remarkably quick turnaround raised eyebrows in the drug discovery community as peer review normally takes several months.

‘Although ISAC recognises it is important to help the scientific community by publishing new data fast, this cannot be at the cost of reducing scientific scrutiny and best practices,’ Voss writes in his statement.

What’s more, one study co-author, Jean-Marc Rolain of Aix-Marseille University, is also the editor-in-chief of the International Journal of Antimicrobial Agents. ‘This might be perceived as a huge conflict of interest,’ writes Elisabeth Bik, a microbiologist-turned-science integrity expert in her blog.

Although the trial results are encouraging, the study has a number of shortcomings. As Bik has noted, the study isn’t a randomised control trial, which is widely considered the gold standard test of a drug’s efficacy. Another limitation is that six of the patients didn’t make it through the hydroxychloroquine treatment, with three of them being moved to intensive care and one dying. The sample also included some young patients even though Covid-19 is known to disproportionately affect older people more severely.

What’s more, a small trial of 30 Covid-19 patients in China found little benefit from hydroxychloroquine. However, another trial of 80 patients published on 27 March by the same researchers in France reports clinical improvement in all but two patients.

Correction: The name of the International Society of Antimicrobial Chemotherapy was updated on 16 April.