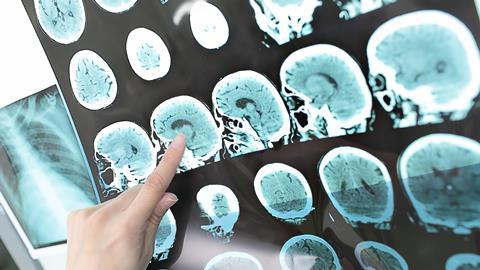 An immune-modulating compound used to reduce the symptoms of multiple sclerosis and now showing potential against coronaviruses, interferon beta is the last of the WHO’s Covid-19 Solidarity trial candidates to get the Chemistry in its element treatment.

In this week’s Chemistry in its element we examine the last compound being studied in the World Health Organisation’s Solidarity clinical trial – interferon beta 1a. This isn’t being tested on its own, but rather in combination with two drugs discussed in our previous podcasts, ritonavir and lopinavir. We don’t yet know how effective this combination will be for Covid-19, but interferon beta 1a itself has been in use to manage the debilitating effects of multiple sclerosis, or MS, for decades. 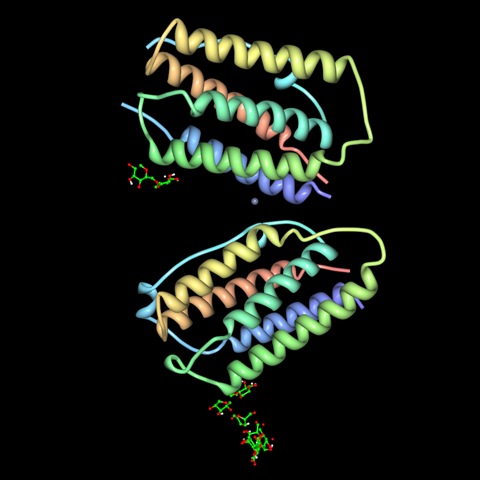 As the denomination ‘beta 1a’ hints at, there are lots of different interferons. The term ‘interferon’ describes a family of peptide signalling molecules that play a role in modulating the immune system, usually in response to viral infection. They’re produced naturally by a wide range of species – including humans – and were first discovered in the late 1950s.

The name interferon was coined by Scottish virologist Alick Isaacs and Swiss virologist and immunologist Jean Lindenmann, as a very straightforward term for factors that interfere with viral development. Interferons do this in a variety of ways, helping to trigger and enhance an immune reaction. They play key roles in recognition of and response to viral infection, activating and coordinating the immune cells that fight off infection, kill host cells and prevent viral replication. In the process, interferons are actually responsible for many of the unpleasant ‘flu-like’ symptoms that come with an infection – including fever, aches and headache. Different interferons are produced throughout the course of an infection, with gamma interferons promoting inflammation at the start of an immune response, and beta interferons throwing a metaphorical damp towel on things when the infection passes.

It took a quarter of a century for our understanding of interferon genetics – and the technology to clone the genes responsible and recombine them into a new host – to advance enough for researchers to find a way to mass produce interferon using genetically modified bacteria. Since the 1980s, interferon preparations have been approved for treating MS, hepatitis and numerous forms of cancer.

Multiple sclerosis is a chronic, debilitating autoimmune disease in which the myelin sheath around neurons is damaged or destroyed by the immune system. The sheath both protects the neuron and helps it to transmit electrical signals, so any damage can lead to loss of sensation, problems with vision and movement and cognitive decline. It’s a relapsing-remitting condition, so many patients will experience a period of illness followed by months, or even years, of remission. Sadly, over half of MS patients eventually develop secondary-progressive MS, a gradual worsening of symptoms with no remission. 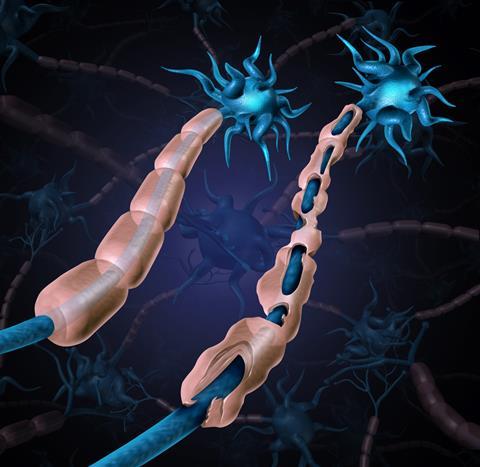 The neuron on the left shows a healthy myelin sheath, while the one on the right shows sheath degredation caused by MS

The cause is unknown, but hypotheses abound. Smoking, vaccination, childhood infections, lack of childhood infections, vitamin D deficiency, stress, solvent exposure, diet and genetics have all been explored, but no clear causative agent has been discovered. There is a link to geography, as it’s generally more prevalent in populations further from the equator, but this alone can’t be the cause – as people who migrate after the age of 15 retain the lower risk associated with their childhood location.

At present, there is no ‘cure’ for MS, but a variety of drugs are available to mitigate symptoms or shorten relapses. As it’s an autoimmune disease, interferons beta 1a and 1b come into play due to their ability to switch off elements of an immune response – the damp towel I mentioned earlier. When given during an isolated attack of MS symptoms, they can both shorten the duration of the attack and reduce the likelihood of disease progression. In patients diagnosed with relapsing-remitting MS, interferons can reduce relapses by about 30% over 2-3 years.

The Covid-19 pandemic is not the first time that interferons have been used against emerging viral infections. Their broad antiviral activity means they’ve been tested against common influenza viruses, adenoviruses and, of course, Sars and Mers. Interferon beta 1a seems to be the most likely candidate against coronaviruses, but not without caveats – if given too late in the disease it could increase the flu-like symptoms, putting patients in greater distress. In the Solidarity trial it’s just one part of a triplet – we’ll have to wait and see if hitting the virus with ritonavir and lopinavir while enhancing the immune system with interferon beta 1a will be the Covid-19 knockout combination.

Unless anything dramatic occurs in the global coronavirus story, next week we’ll return to our usual programme, telling the stories of the compounds that make up the world around us. Brian Clegg will return with a compound that you probably have in your food cupboards right now, but that can have a dark side.

Although oleic acid appears to be relatively beneficial, it has a Mr Hyde to its Dr Jekyll in elaidic acid. This has exactly the same chemical formula, but is oleic acid’s stereoisomer. Trans fats based on elaidic acid are found in some processed foods and are thought to have a higher risk of causing heart disease than cis fats.

Join Brian next time. Until then, find all of our previous podcasts at chemistryworld.com/podcasts, and get in touch with any comments or compounds for us to look into. Email chemistryworld@rsc.org or tweet @chemistryworld. I’m Ben Valsler, thanks for joining me.

Additional music: The Night Sky by Falls, via Soundstripe