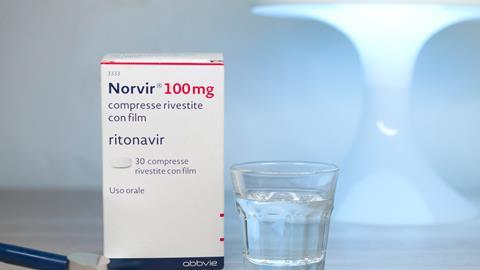 This week we’ll take a slight step back from constantly covering coronavirus compounds. This week’s compound is being tested in the World Health Organisation’s Solidarity trial – combined with last week’s compound, lopinavir, and with interferon, which we’ll cover next week. But that’s not even the most interesting thing about it. Here’s Alexander Whiteside.

In the 1930s, the celebrated science fiction writer H G Wells visited General Electric’s research labs. His host was the star of the laboratory, physical chemist Irving Langmuir, who entertained his guest with an idea for a story:

What if there was a form of ice that didn’t melt at room temperature? 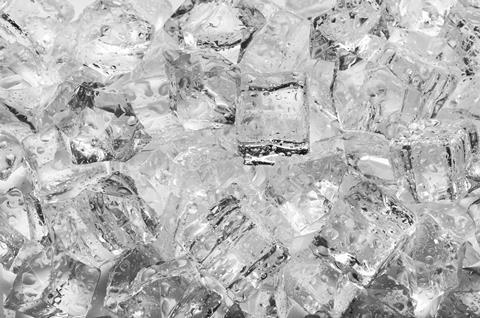 When water cools below zero celcius, the attraction between the molecules is strong enough to stack them up in a crystal of ordinary ice. Above zero, they fall apart again. Room temperature ice would have to stack the molecules in a new way that was more stable. Water molecules evidently don’t stack that way on their own.

But if someone made a crystal of that ’warm ice’, and dropped it in water, it could act as a template that other water molecules could copy. That crystal would grow by adding molecules to its structure until all the water had been converted to warm ice. If that water was the Pacific Ocean, that would cause some problems.

This imaginary warm ice is an example of two real phenomena: polymorphism and seeding. Molecules can pack together in a lot of different ways, known as polymorphs of that material. Normal ice and warm ice would be different polymorphs of water. And some polymorphs are unlikely to form without an example to seed the process, like that first crystal of warm ice.

There are about twenty known polymorphs of water ice, and none of them are room-temperature solids waiting to take over the planet. But not every molecule is so benign.

In 1996, Abbott Laboratories launched ritonavir, an antiretroviral drug to treat HIV. It was part of a wave of pharmaceutical breakthroughs that would cut AIDS deaths in the US by half in the late 1990s. John Morris is a senior director at Abbvie, Abbott’s successor. In the nineteen nineties he was an analytical chemist working on ritonavir and its formulations, commercially named Norvir. 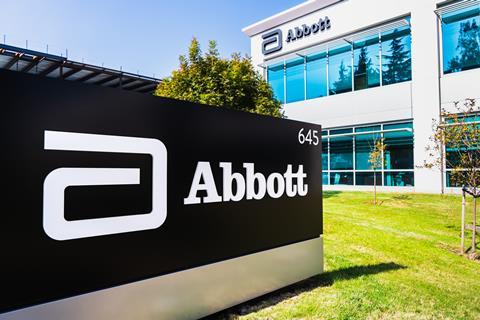 There was a great deal of excitement at the time in the late 1990s to bring forward ritonavir in the Norvir products, and we really felt that this was a transformational moment for HIV patients to provide a new therapy option that was transformational in the sense of changing it from somewhat of a death sentence to be diagnosed with HIV to now something that could be treated and managed as more of a chronic illness. 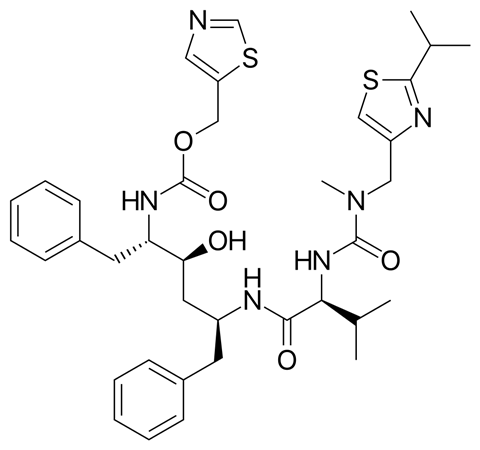 Although the drug was very effective, ritonavir crystals don’t dissolve much during digestion, so they aren’t absorbed very effectively by the body. The crystals are much more soluble in a high-alcohol solvent mixture, which was the original, liquid, version of the drug.

Unfortunately, that bright-orange concoction was so foul that some patients couldn’t tolerate it at all, and those that could would be tasting it for hours afterwards. Abbott came up with a capsule version of ritonavir instead: a much more concentrated solution, sealed in flavourless gel capsules.

Abbott produced both versions successfully until the middle of 1998, when the capsules started failing quality control.

A portion of the ritonavir in the capsules wasn’t in solution. Instead, it was in the form of insoluble crystals, with a new structure nobody had seen before. An insoluble form of ritonavir was medically useless – production was halted.

The new crystals turned out to be the ritonavir equivalent of warm ice: a new, more stable polymorph, ‘Form Two’.

This was certainly previously unknown. Through all of the extensive development work and characterization that happened leading up to the marketed products, there was only one known polymorph of ritonavir. And so now discovering a new form was really quite unexpected.

It was half as soluble as the original ‘Form One’, so it wouldn’t stay dissolved in the concentrated environment of the capsules. And because ‘Form Two’ was a more stable structure, if you tried to make Form One with it around, it would just seed the formation of more Form Two.

It’s not clear where Form Two came from.

One of the ritonavir degradation products had this particular conformation. So it was thought at the time and I would say still believed today that it was a degradation product that might be present at very low levels in the drug product manufacturing process that could have acted as this template for the new ritonavir polymorph.

But once Form Two existed, it carried its own template, for a new, less useful version of ritonavir everywhere it went.

And Form Two went everywhere. Within days of identifying Form Two, the company’s analytical lab could only make that form of the drug. The bulk drug coming off the production line in Chicago turned out to be contaminated before it ever went in to the capsules. Staff from Chicago were sent to an uncontaminated production line in Italy to find out if they were doing anything differently. Within weeks, that line was producing Form Two as well.

Abbott needed to eradicate Form Two and switch back to pure Form One if they were going to resume production.

With a polymorph there are some interesting analogies to working almost with something like a virus in the sense of trying to contain the new polymorph or work in very sterile environments to try to make sure that you’re free of this polymorph. Even the extent of visiting and introducing it to new sites, albeit unintentionally.

Our initial attempts were to try to you know keep this very critical therapy available to patients and initial efforts were to work in very clean manufacturing environments to try to continue to produce the products with the known polymorph.

It didn’t work. Form Two was now the only crystal structure of ritonavir that mattered outside of airtight, meticulously sterilised laboratory glassware. Form One had disappeared.

In October 1998, Abbott Laboratories went before the press and patient groups, and explained why it could no longer make ritonavir capsules.

I think it’s clear that the new form is the thermodynamically stable form and eventually mother nature wins and you can’t continue to avoid the new form. Eventually, you need to deal with it directly.

For patients, that meant a switch to the much-loathed liquid version of the drug. Form Two was soluble enough that Abbott was still making that. They couldn’t do anything about the appalling flavour, but they did share patients’ favourite ‘chasers’ to mask the taste, like the hazelnut spread Nutella.

For the company, it meant writing off their investment in the capsules and coming up with a new way of delivering the drug.

In parallel, we were certainly working to figure out how to modify or adapt our products to accommodate the new polymorph.

The development of a Norvir soft gelatin capsule had been well underway. We initially were developing this with a higher dose strength. At that strength with the new lower solubility polymorph, the Form Two, that product was not viable and had to be very quickly adapted to reduce the strength to accommodate the lower solubility polymorph and come forward with that product. The strength was adjusted back to 100 milligram, but now in this soft gelatin capsule presentation, that was a viable commercial product.

That came on the market in 1999, to patients’ relief. The affair ultimately cost Abbott Laboratories around $250 million.

This wasn’t the first drug to show unexpected polymorphism. And it certainly wouldn’t be the last. Research published in 2018 suggests that a more stable polymorph is waiting to be created for about fifteen to fifty percent of all drugs.

Rarely is there a case where it has such a significant impact on something that is critical with solubility characteristics. I would say that, based on this experience, there was a continued application in a way of investigating polymorphs and perhaps a heightened awareness of the potential impact. And I would say it is certainly embedded as pretty routine practice in drug development today.

As it happens, H G Wells didn’t do anything with Langmuir’s idea about warm ice. It circulated in the company lore at General Electric into the late 1940s, when a publicist named Kurt Vonnegut heard about it. After Langmuir died, Vonnegut decided it was fair game. He wrote a novel, Cat’s Cradle, about the great scientist Felix Hoenikker and his reckless invention, Ice-Nine. 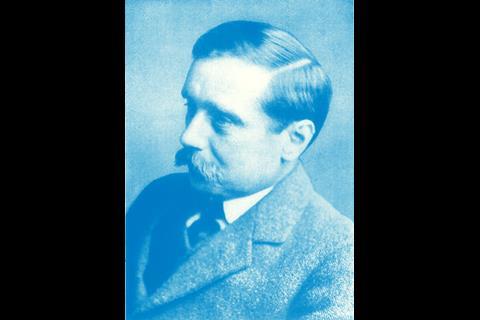 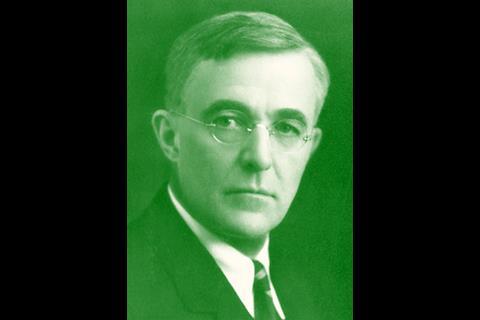 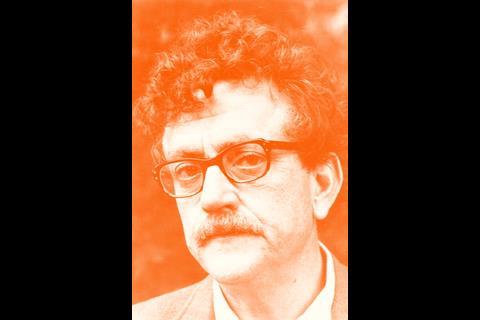 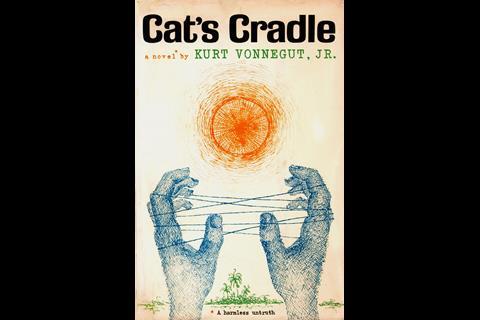 That was Alexander Whiteside, with the real life tale of ritonavir’s history that could have come straight from science fiction. He was joined by John Morris from Abbvie. Next week we’ll see the final part of the Solidarity trials, searching for treatments for Covid-19: multiple sclerosis drug interferon beta. Though, like the other drugs in the trial, coronavirus is only the most recent chapter in this compound’s story.

Until then, get in touch with any compounds to consider. Email chemistryworld@rsc.org or tweet @chemistryworld. And find all of our previous podcasts at chemistryworld.com/podcasts. I’m Ben Valsler, thanks for listening.