Aromatic anion made from nitrogen and phosphorus synthesised 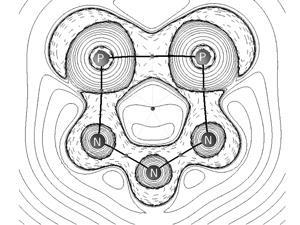 Scientists in the US have successfully synthesised an aromatic ion made from only nitrogen and phosphorus. The anion is a rare example of a stable aromatic species containing no carbon atoms.

Carbon-rich aromatic compounds, consisting of a flat, stable ring of atoms, are ubiquitous in nature and play an important role in the manufacture of commercial products. One of the most prominent, benzene, is used as the starting point to make a whole host of plastics, polymers and rubbers.

There are also many heterocyclic aromatic species containing carbon, but purely inorganic aromatics are hard to come by. Only a handful of these molecules has been synthesised to date, with an all-phosphorus anionic ring, the 1,2,3,4,5-pentaphospholanepentayl ion, P5-, being one of the most prominent.

Now, Alexandra Velian and Christopher Cummins at the Massachusetts Institute of Technology have isolated a diphosphatriazolate aromatic anion, P2N3-, from an anthracene-based source of diphosphorus. The researchers were able to confirm the ions’ aromatic character by analysing the extent of magnetic shielding at the ring’s centre.