Researchers have devised a way to selectively synthesise seven- or nine-membered rings from the same set of reagents.1 The strategy will help chemists build biologically interesting heterocyclic scaffolds.

Oxygen heterocycles consisting of medium-sized rings are a regular sight in FDA-approved pharmaceuticals.2 However, unfavourable entropic factors and transannular interactions mean that most cyclisation strategies to form medium-sized rings require reagents with a fixed reaction site. Changing the ring size usually requires changing the substrate design, which is both time-consuming and expensive.

Now, a team of researchers led by Bo Han of Chengdu University of Traditional Chinese Medicine in China has developed a palladium-catalysed [5+n] annulation to form either seven- or nine- membered rings from the same set of substrates just by altering the reaction conditions. Reacting various electron deficient allylidenemalononitriles as diene substrates with vinylethylene carbonates in the presence of a palladium catalyst gave over 50 examples of seven- and nine-membered heterocycles with high yield and excellent regioselectivity.

The team showed how temperature and solvent changes alter the reaction kinetics and thermodynamics to generate the desired ring size. Initially, the reagents undergo a [5+4] annulation to form the nine-membered product under kinetic control. However, heating the reagents in THF causes a palladium-catalysed ring-opening to create a thermodynamically-controlled intermediate that then recyclises to form the seven-membered ring. The team showed that the method can form further interesting polycyclic compounds by a transannular [2+2] cycloaddition of the nine-membered ring. 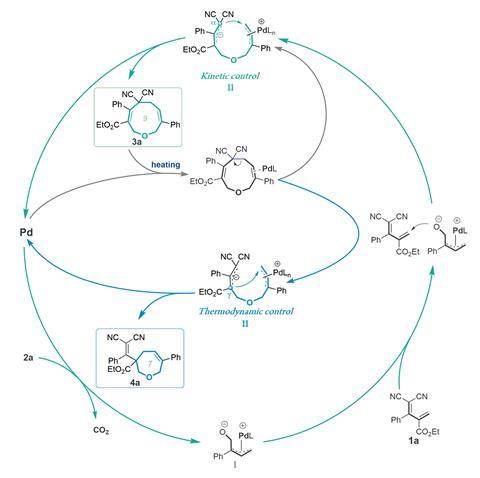 Mechanistic studies suggest that the [5 + 2] annulation proceeds through palladium-catalysed ring-opening/re-cyclisation from the [5 + 4] adducts.

Hannah Stewart from the Northern Institute for Cancer Research at Newcastle University in the UK, says the method will expand the scope of synthetic medium-sized rings. ‘It’s great to see work being done to access these challenging ring sizes that have so much potential within drug discovery,’ she says.

‘Our results not only provide a method to build cage-like molecules and seven- or nine-membered rings, but also might lead to developing a new type of dipole building block towards complex molecule synthesis,’ says Han. ‘But we still have a long way to go to develop it into a universal method.’