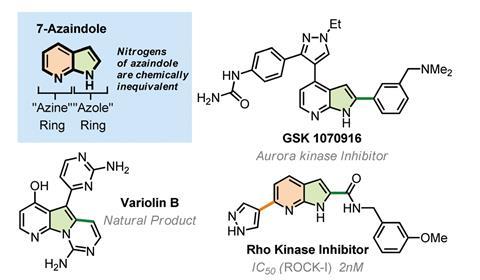 A directing group that effortlessly moves from one to the other ring in bicyclic heteroaromatics could shorten lengthy reaction sequences – a boon for drug discovery and work that has already attracted attention of medicinal chemists.1

Directing groups are temporarily attached to a molecule to guide a reagent – often a metal – to a particular reaction site. Chemists often use this strategy to attach metals to aromatics, to the carbon atom neighbouring a directing group. Once attached, the metal can be replaced with one of many functional groups. However, this approach usually involves many steps, including installing and removing the directing group, making it unattractive for large scale applications.

Chemists have now designed a carbamoyl directing group that can be attached to one or the other nitrogen atom in 7-azaindoles, directing metallation to either of the molecule’s aromatic rings. More importantly, the group can move between these nitrogen atoms on demand without chemists having to detach and reattach it. ‘Three different companies have asked me about this unusual reactivity so far,’ says one of the study’s lead authors, Victor Snieckus from Queen’s University, Canada.

‘This is the first time a directing group “dance” is applied to azaindoles, a scaffold that is quite interesting for the chemical and pharmaceutical industries,’ Snieckus explains. ‘Thanks to the dance, we are able to introduce substituents in positions like C6, which was quite difficult to access by traditional methods.’

Iterative functionalisation through DMG controlled shifting of the DMG

Although moving directing groups has been previously used in smaller heterocycles,2 this approach broadens the scope of directed metallation. ‘You are no longer restricted to functionalising one position, you can easily recycle the directing group to another position and keep adding substituents there,’ says Snieckus.

The study’s co-leader, Matthew Kitching from Durham University, UK, explains that ‘you don’t even need [nuclear magnetic resonance spectroscopy] to know where your directing group is – when it migrates from [one nitrogen to the other], the lithiated intermediate switches from bright red to deep forest green’.

Eva Hevia, an expert in organometallic chemistry working at the University of Bern, Switzerland, says that ‘this new approach is extremely elegant and shows an exquisite control of the regioselectivity’. ‘By testing further reactions, like Suzuki couplings, the authors show great promise in taking this new methodology to the next level,’ she adds.

‘So far, the authors have tested the scope of their reaction modifying a commercial antipsychotic agent, which proves there are certain functional groups that can withstand the relatively harsh conditions of the dance,’ explains Hevia. ‘And maybe, using different metallic bases with zinc or magnesium, this concept could be extended to other related heterocycles bearing sensitive functional groups while operating at room temperature.’

Kitching wonders about the possibilities of implementing a similar strategy in molecules with more heteroatoms. ‘Could we recycle the directing group even further, making it jump to a different molecule? How long can we keep this dance going?’