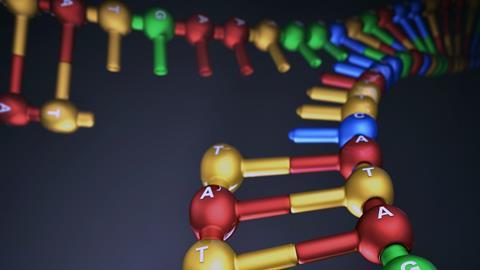 DNA charge transport enables handover from one enzyme to another

The ability of DNA to carry electrons like an electrical wire was discovered more than 20 years ago. Now, researchers have found that the effect may be involved in DNA replication, enabling two crucial enzymes to send signals to one other.

‘Our model proposes that there is rapid electron transfer signalling through the DNA–RNA hybrid formed between DNA primase and DNA polymerase α,’ says Jacqueline Barton at the California Institute of Technology, US. This ‘handover’ from one enzyme to the other is an important step in kick-starting DNA replication.

Barton and her colleagues joined forces with Walter Chazin’s group at Vanderbilt University, and together they proposed that iron–sulfur clusters in DNA primase and DNA polymerase α act as redox ‘switches’ that help coordinate the dissociation and binding of these enzymes to a DNA strand.

Barton’s group previously showed that the transfer of electrons down DNA can also affect the oxidation states of these iron–sulfur clusters within other DNA enzymes involved in repair. They proposed these enzymes use electrical signals to detect DNA damage.

When Chazin’s group found these clusters in replication enzymes they decided to investigate whether a similar mechanism was at play. ‘We were able to show that the cluster was required for function, but could not come up with any logical explanation for what the cluster was doing,’ says Chazin. 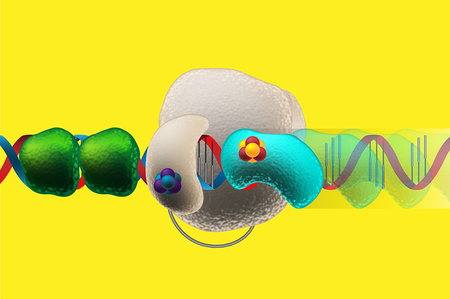 A protein called DNA primase begins to replicate DNA when an iron-sulfur cluster within it is oxidised, or loses an electron (blue and purple). Once this primase has made an RNA primer, a protein signaling partner, presumably DNA polymerase α (blue), sends an electron from its reduced cluster, which has an extra electron (yellow and red). The electron travels through the DNA/RNA helix to primase, which comes off the DNA. This electron transfer signals the next steps in replication

The two groups used DNA-mediated electrochemistry to investigate iron–sulfur clusters in DNA primase. ‘We measure electron transfer on gold electrodes modified with a film of covalently attached duplex DNA,’ says Barton. ‘We can scan a range of voltages and observe ground state electron transfer between a DNA-bound protein and the gold electrode surface, through the intervening duplex DNA.’

‘We find that the oxidation state of the [4Fe4S] cluster in human DNA primase functions as a reversible redox switch governing DNA binding; the oxidised [4Fe4S]3+ form is tightly bound to DNA and can participate in DNA charge transfer, whereas the reduced [4Fe4S]2+ form is more loosely associated.’

The team proposed that when in the oxidised state, DNA primase can bind to uncoiled DNA at the replication site and create a complementary RNA primer. When it receives electrical signals that travel down the DNA strand from DNA polymerase α it becomes reduced and dissociates from the DNA, so the other enzyme can take its place.

‘This is an intriguing link between protein function and DNA charge transport,’ comments Jason Slinker of the University of Texas at Dallas, US. ‘Future efforts will certainly explore the role of this redox-dependent functionality in other forms of DNA replication and DNA repair.’ He adds that ‘in vivo demonstrations of this effect would solidify the assertions of this work’.

Amie Boal, a former member of Barton’s group now based at Pennsylvania State University, US, says this work ‘really expands our knowledge of the possibilities for how the cell could exploit DNA charge transport to effectively maintain the genome’. ‘In my mind, the most interesting next steps will be to understand which other proteins or pathways use this chemistry and how the different systems intersect with each other.’