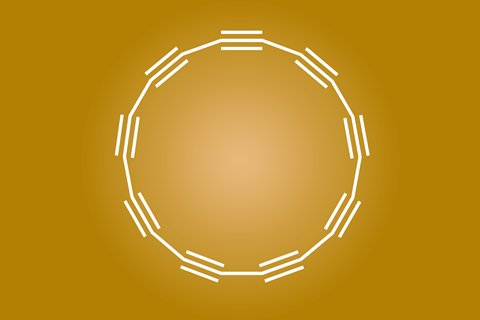 Computer modelling demonstrates that an exotic ring-shaped molecule is the smallest known electron acceptor made purely of carbon.1

Allotropes of carbon – from graphite and diamond to nanotubes and fullerenes – show diverse and remarkable properties. Cyclo[18]carbon is yet another configuration causing a stir. Consisting of 18 carbon atoms joined by alternating single and triple bonds, scientists from IBM Research in Switzerland and the University of Oxford, UK, synthesised a stable form of the ring-shaped molecule earlier this year.2

Now, researchers in Spain have used computational techniques to probe the structural and electronic properties of the molecule, and have discovered it to be an electron acceptor. The team, led by Alexander Voityuk and Miquel Solà from the University of Girona, used density functional theory, a common technique in quantum chemistry. But cyclo[18]carbon presented a challenge: the simulation results were very sensitive to the details of the underlying equations, calling into question their reliability. So the scientists had to calibrate their model against experimental knowledge and more intensive computational results. They found that giving a high weighting to the exchange interaction – an effect arising from quantum-mechanical symmetries – derived the most accurate results.

With their simulations ready to go, the researchers virtually coupled cyclo[18]carbon with various molecular complexes, and discovered that it readily accepted electrons from a range of donor molecules.

Electron acceptors are important components in molecular electronic devices. Fullerenes, for example, play a powerful part in many organic solar cells. The potential applications of cyclo[18]carbon remain to be discovered and exploited, but its establishment as the smallest known all-carbon electron acceptor is a milestone in itself.