A high pressure allotrope of nitrogen, formed at 1.4 million times atmospheric pressure, has the same two-dimensional atomic structure as some forms of other elements in its group on the periodic table, such as phosphorus and arsenic, according to researchers.

The finding – published a few days apart by two independent groups of scientists – explains a long-standing anomaly of the periodic table: why doesn’t high pressure nitrogen show similarities with other members of its group?

The most common form of nitrogen – dinitrogen, or N2 – has a strong triple-bond and makes up around 78% of the Earth’s atmosphere. Other forms of nitrogen are found only at extreme temperatures, such as the solid nitrogen that forms on the frozen surface of Pluto. Single atoms of nitrogen are extremely reactive, and so are seldom seen.

Nitrogen heads group 15 of the periodic table, which includes phosphorus, arsenic, antimony and bismuth. High pressure forms of neighbouring carbon (group 14) and oxygen (group 16) can show similar chemical properties to other elements in their groups. Diamond, for example, a high pressure allotrope of carbon, is structurally similar to crystals of silicon and germanium. But nitrogen – until now – did not behave in this way, and chemists have sought to learn why it’s different.

Now, two groups of scientists have independently published research on what they have both called ‘black nitrogen’ – a transparent and crystalline allotrope of nitrogen formed at very high pressures and temperatures. They report that the atoms in black nitrogen have the same two-dimensional structure as phosphorus allotrope black phosphorus – hence the name of the new form of nitrogen. 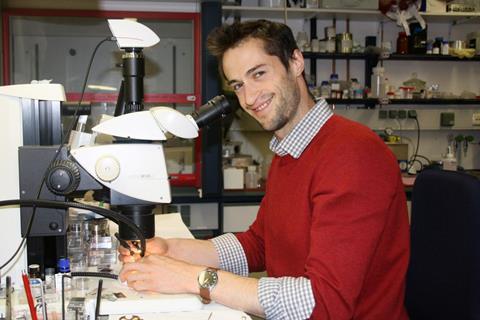 This is the first time that an allotrope of nitrogen has shown chemical similarities with other elements in its group, says Dominique Laniel of Bayreuth University in Germany, who led one of the teams of researchers.1 ‘It is a golden rule of high pressure sciences that elements at high pressure adopt the same structures as the same-group elements below them in the periodic table at lower pressures,’ Laniel says. ‘Before this discovery, nitrogen seemingly did not obey that rule.’

A second team of scientists, based in China, the US and Canada, published their results just a few days later.2 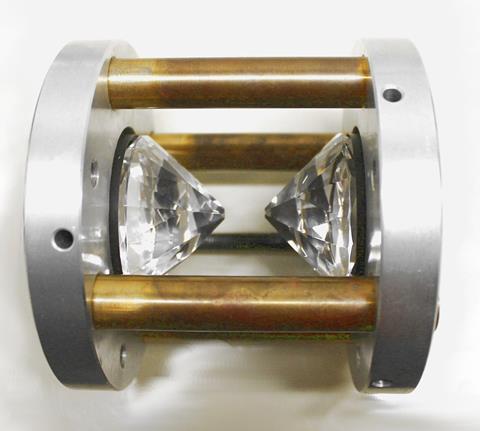 Black nitrogen is formed when nitrogen is placed in a diamond anvil cell between opposite diamonds and pressed together under extremely high pressures.

Laniel’s team created a small sample of black nitrogen, only a few micrometres across, by compressing nitrogen between the tips of a diamond anvil cell to around 140GPa, and heating it with a laser to around 4000K. Co-author Natalia Dubrovinskaia says the resulting sample was so small a special approach developed by her group was need to carry out crystallography studies.

Allotropes are common in high pressure chemistry – Dubrovinskaia’s group has found three new high pressure allotropes of boron, for instance – but ‘the structure solution of a light element [nitrogen] at one and a half million atmospheres is a rare, not to say unique, example,’ she says.

And while the two-dimensional atomic structure of black phosphorus is being investigated for use in electronics, the conditions needed for black nitrogen are so extreme that it is unlikely to have any practical applications, Dubrovinskaia says. But ‘one never knows the fortune of a discovery. Not today, for sure, but tomorrow – who can predict?’

Physical chemist Russell Hemley of the University of Illinois in Chicago, who was not involved in the latest research, notes the new allotrope was predicted in a 1985 paper3, while the idea that diatomic molecules can break down under pressure to form framework structures dates from 1935.4

Roald Hoffmann of Cornell University in Ithaca, New York, who won the Nobel prize for chemistry in 1981, explains the new allotrope is a wide bandgap semiconductor, consisting of nitrogen atoms joined by three single bonds and a lone pair of electrons on each atom. This is ‘great experimental work’, he adds.