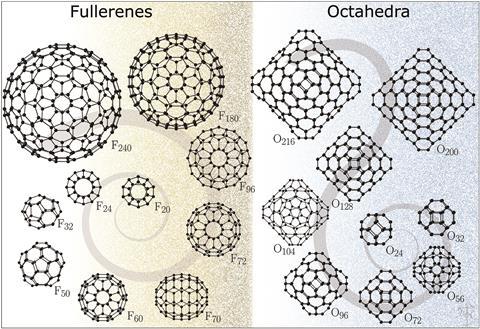 Fullerenes contain connected five- and six-membered carbon rings that allow the surface to curve and form stable 3D structures. Due to their useful photo, electrochemical and physical properties, fullerenes have become common in research and appearing in applications ranging from photodynamic therapy to solar cells. Meanwhile, carbon nanostructures containing four-membered, or tetragonal, rings are almost unheard of, and most of the carbon community assumes they would be unstable because of the ring strain within such motifs. Researchers from the UK, however, have now calculated that octahedral clusters with tetragonal rings at the vertices may actually be more stable than previously thought.

The researchers also suggested where to look for these hitherto elusive molecules; a shift in the vibrational density of states should allow experimental discrimination between different carbon clusters. The group say that, if isolated, the new carbon allotrope could be used within building blocks for inorganic chemistry or in materials, such as those for photovoltaic devices.