New form of pure carbon made by manipulating atoms 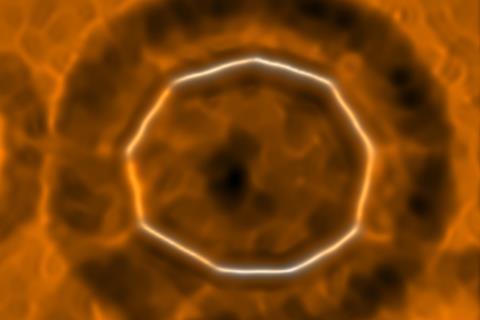 A new molecular form of carbon has been created that is neither a fullerene nor a relative of graphene. The IBM and University of Oxford team produced a circle of 18 carbons using atom manipulation and analysed its structure with atomic force microscopy (AFM).

Pure carbon has been known for just two forms – diamond and graphite – until they were recently joined by fullerenes and graphene. Molecular chains of polyynes, alternating single and triple carbon–carbon bonds, are also pure carbon except for the fact that the ends of the chain have to be capped in some way – unless they can be joined up. The quantum mechanics of the triple bonds dictates that polyynes are straight lines, but if the chain is long enough, researchers theorised, it might just be possible to introduce a small amount of curvature to form a circle and then link it up.

The possibility of producing cyclic polyynes as a new, molecular form of pure carbon in ring form has inspired chemists for decades. Some researchers have succeeded in producing such molecules by vaporising graphite with lasers, but these were too short-lived for the structural investigations to prove their chemical structure.

Last year, the groups of Harry Anderson and Przemyslaw Gawel at the University of Oxford, UK, and Leo Gross at IBM Research in Switzerland managed to produce straight polyyne molecular wires by atom manipulation and then characterised them using AFM. ‘Making new carbon allotropes was actually the original motivation for the polyyne surface chemistry,’ says Anderson, who has harboured this ambition since his postdoc days in the 1990s.

Now these groups have used the same techniques to produce cyclo[18]carbon on a sodium chloride surface and characterised the molecule. Given the formation of a ring of 18 carbon atoms, there are two fundamentally different ways in which they could be connected – either by alternating single and triple bonds, like a polyyne, or by double bonds throughout, like a cumulene. In the latter case, all bonds should look equal, while in the former case the triple bonds should appear shorter and with higher electron density than the single bonds.

The AFM conducted at Zurich clearly showed the polyyne structure, establishing cyclo[18]carbon as circular polyyne and a new allotrope of carbon.

Rik Tykwinski from the University of Alberta at Edmonton, greeted the news enthusiastically, commenting: ‘This is a fantastic achievement – it’s certainly not every day that you discover and characterise a new, molecular form of carbon!’