A new study suggests that catenanes composed of interlocked cyclo18carbon rings could be stable due to kinetic trapping.

2019 saw the discovery of a new molecular allotrope of carbon. Cyclo18carbon, C18, is a cyclic poly-yne consisting of 18 carbon atoms connected by alternating single and triple bonds. Even more remarkable is that this molecule satisfies Hückel’s Rule of having 4n+2 π-electrons, which means the molecule is aromatic. 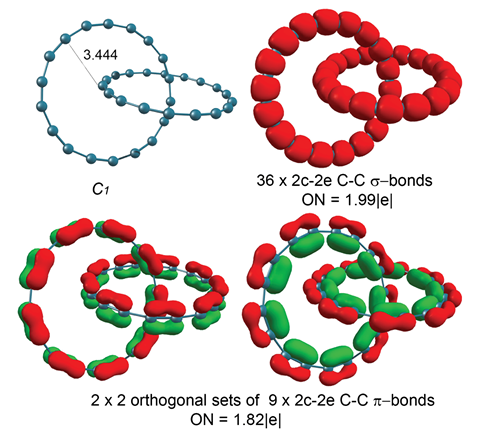 The bonding pattern of [2]catetane resembles that of a monomer, satisfying first criterion for a mechanical bond

Now, a computational study by researchers based at Utah State University in the US and Southern Federal University in Russia has proposed that up to five of these rings could be linked together into surprisingly stable chains.

The study shows that, while the catenane arrangement may not be the lowest possible energy state for these molecules, the chains are stable due to the unusually high energy barriers that must be overcome to break them. This phenomenon is known as kinetic trapping and is used by supramolecular chemists to design molecular machines and motors.

It is thanks to the aromaticity of C18 that it is so difficult to break the interlocked arrangement. Repulsion between the π-systems on each ring prevent them coming close enough to form a chemical bond. Therefore, the rings are unable to separate and unable to move closer together, trapped in a stable catenane.

Correction: The last paragraph of this article was updated on 11 February