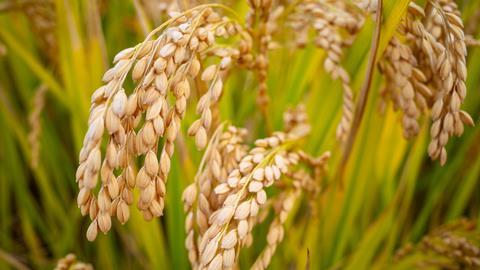 Ozone pollution is damaging wheat, rice and maize crops across China, South Korea and Japan to the tune of $63 billion (£46 billion) each year. The study by an international team of researchers highlights the need to mitigate increasing ground-level ozone across east Asia to safeguard food production in one of the largest bread baskets and rice bowls in the world.

Ground-level ozone is one of the most common air pollutants. It’s formed when other pollutants in the atmosphere, including nitrogen oxides from fuel combustion and volatile organic compounds from paint and solvent manufacturing, react with sunlight.

Scientists have long known ozone can reduce plants’ growth and ability to survive by entering leaf openings and oxidising tissues. Over the past two decades, ozone modelling data have provided rough estimates of global crop losses due to ozone, which although uncertain, have raised food security concerns, particularly in Asia where ozone levels are rising.

Now, Kazuhiko Kobayashi at the University of Tokyo and his colleagues have combined observations and experimental work – as opposed to models – and obtained the most accurate estimates to date for east Asia. ‘The results are indeed worrisome for food production in east Asia,’ says Kobayashi.

The team’s analysis suggests that a third of wheat crops in China between 2017 and 2019 were lost due to ozone damage, and 23% and 9% of rice and maize, respectively. South Korea’s wheat yields suffered losses of 28% and rice 11%, while Japan’s wheat losses were 16% and 5% for rice. 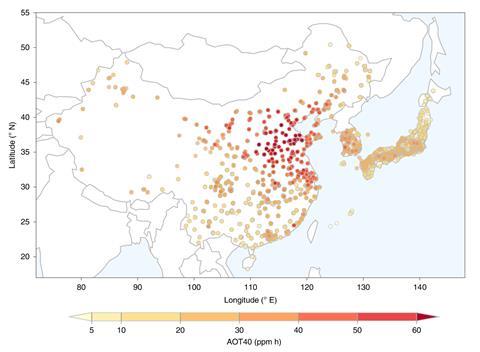 Ozone pollution in east Asia is causing significant losses of crops of rice, maize and wheat

To get these yield loss estimates, the team first gathered data from experiments conducted across a range of regions that showed how elevated ozone levels affect varieties of wheat, rice and maize that are grown in China, South Korea and Japan. This data was then combined with three years’ worth of ground observations of ozone measured at over 3000 monitoring sites across the three countries.

‘This adds to the compelling evidence of the deleterious effects of ozone on the productivity of staple crops, particularly those growing in Asia,’ says Lisa Emberson who studies the effects of air pollution on crop yields at the University of York, UK. ‘However, there are still uncertainties in the assessment of the sensitivity of crop species and cultivars [to ozone], which are particularly important for wheat.’

Kobayashi agrees that the wheat loss estimates ‘might be too large’ particularly in China. He explains that data from the North China Plain region may have skewed the result because none of the ozone elevation experiments took place there, instead being done in the lower reaches of the Yantze River delta, where the climate and soil are different.

However, Kobayashi remains confident that results generally hold up. That’s because further experiments with plants, including wheat cultivars, that were treated with ethylenediurea, which inhibits ozone damage, revealed yield increases that mirrored the results from the yield loss experiments.

To remedy the problem of yield losses, Kobayashi suggests screening for varieties that possess high tolerance to ozone. ‘Development of anti-ozonant chemicals may be another possibility, but it would take time to clear all the requirements for safe use of the chemical.’

Emberson, however, says ozone precursors need to be mitigated to curtail the continuing trend of rising ozone concentrations in parts of Asia. ‘Mitigation of ozone precursors will not only benefit crop yields and other types of vegetation, but also human health and the climate as ozone is also responsible for exacerbating cardiovascular disease and is an important greenhouse gas in its own right,’ she says.