Several groups have potential Sars-CoV-2 vaccines ready or close to testing, thanks to rapid development pathways

The race is on to develop treatments for Covid-19. While the short-term focus is on antivirals and drugs to treat infected people, a vaccine is the ultimate aim. 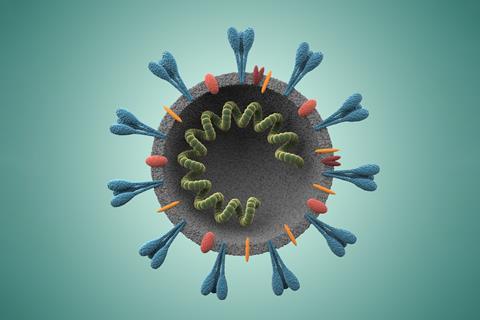 RNA vaccines use synthetic messenger RNA strands that encode proteins from the virus surface, usually encapsulated in lipid nanoparticles, to provoke an immune response to the virus

Clinical trials are underway with Gilead’s experimental antiviral remdesivir, which mimics an adenosine nucleotide and interferes with viral RNA replication. It was originally developed to treat Ebola, and has shown promise in animal models of Middle East respiratory syndrome (Mers) and Severe Acute Respiratory Syndrome (Sars), both caused by coronaviruses. One Gilead trial, with 400 participants, involves patients with severe Covid-19 receiving treatment for either five or 10 days. Trials are also underway in China.

On the vaccine front, RNA vaccines are leading the way because they’re particularly suited to speedy development. And while no RNA vaccine has ever been licensed, the threat of a pandemic is a great incentive to accelerate their progress. In late February, biotech Moderna sent mRNA vaccines for Sars-CoV-2 to the US National Institutes of Health (NIH) for a first-in-man clinical trial.

RNA vaccines consist of messenger RNA strands. They are injected into the body, usually within lipid nanoparticles. These merge with cells. Once inside, the RNA sequence is translated by ribosomes to make a protein or parts of proteins. ‘Rather than generating proteins in a manufacturing plant and purifying them, you are getting the muscle to do the job and make the protein itself,’ says Robin Shattock, a virologist at Imperial College London, UK.

RNA can be synthesised in substantial quantities, outpacing vaccine production with live microbes or recombinant proteins. ‘For a traditional vaccine, you might want to grow a virus in cell culture and produce hundreds or thousands of litres,’ says Shattock. ‘RNA is simpler. You can produce it by a synthetic process, which is why it is particularly attractive for outbreak pathogens.’

There is no licensed RNA that is being manufactured in tens or hundreds of millions of doses. That infrastructure needs to be built

CureVac, a German-based company specialising in mRNA vaccines, also plans to start clinical trials against Sars-CoV-2 in early summer, and a third company, BioNTech in Germany, says it has begun preclinical research on a vaccine.

CureVac ran the first ever mRNA vaccine trials in 2008 and has three production facilities in Tübingen, one of which can make 10g batches of mRNA – enough for thousands of vaccine doses. In a clinical trial of its mRNA rabies vaccine, the company found that 1µg of mRNA was enough to induce a protective immune response. ‘A couple of days after injection into muscle, you see enough antibodies to protect someone against rabies,’ says Ingmar Hoerr, chairman and co-founder of CureVac. The company’s rabies trial, which began in 2015, was the first mRNA vaccine to target an infectious disease. If successful, it could lead to a rabies vaccine for travellers that requires just one or two doses (rather than three), with fewer side effects than current options.

Antivirals such as Gilead’s remdesivir are being tested as treatments for infected people, to reduce the duration of infection and slow its spread

CureVac says it could manufacture 10 million doses of coronavirus vaccine by this summer. ‘If we need a billion doses, that is possible. We can upscale,’ says Hoerr, confidently.

The company is testing 10 different versions of a novel coronavirus vaccine. Each uses unmodified RNA sequences, but employs various tricks to make the RNA more stable and also to tune a person’s immune response. ‘We can include danger signals on the RNA, which will attract immune cells,’ says Hoerr.

Key to creating an effective vaccine is getting the immune system to recognise the virus as foreign. One way this happens is for dendritic immune cells to express antigenic proteins from the vaccine on their surfaces. With a protein-based vaccine, the cells absorb the protein and present it, but with RNA vaccines, the take up the mRNA, then make and present the encoded antigen protein. ‘Having protein made inside the cell seems to give better antigen presentation,’ says immunologist Drew Weissman from the University of Pennsylvania, US. This stimulates T cells and antibody-making B cells, as well as formation of long-lived memory cells

Antibodies are good at stopping viruses infecting cells, while certain T cells are especially effective at killing cells that are already infected. ‘If you want a really strong vaccine for a virus, you have to attract T cells,’ says Hoerr.

It is a race, but a race against the virus rather than each other

Weissman is one of the pioneers of mRNA vaccines. Around 10 years ago, he and Katalin Karko developed the technology licensed by Moderna and BioNTech for mRNA vaccines. Karko is now at BioNTech, which focuses on cancer and rare diseases, but still works with Weissman on infectious diseases.

Weissman plans to start clinical trials for two mRNA vaccines against HIV, one against influenza and another against genital herpes. One of these is with BioNTech, the others are supported by the NIH. The flu vaccine is furthest advanced. The hope is that this will be universal flu vaccine, capable of protecting against the flu virus as it mutates over years, and will achieve at least 75% protection, as opposed to 30 to 40% with today’s vaccines.

Many of BioNTech’s RNA vaccine candidates are directed towards cancer. It is running clinical trials for a variety of solid tumours. The company is collaborating with Pfizer on influenza and the Bill and Melinda Gates Foundation on HIV and tuberculosis vaccines. Chief operating officer Sean Marett estimates that BioNTech’s mRNA flu vaccine could take a matter of weeks from the release of the virus sequence to make and ship, against the existing egg-based manufacture time of five to six months. ‘We do have a coronavirus preclinical programme in house,’ he adds.

At Imperial, Shattock eagerly downloaded the sequence of the coronavirus when it was released by Chinese scientists. He used it to sequence RNA for the spike glycoprotein. ‘We made a template for our RNA-based vaccine in two weeks,’ says Shattock. ‘The normal cycle for developing a vaccine is two years.’

He deployed a pseudovirus with an HIV backbone incorporating the spike protein to test whether his RNA sequences generated enough antibodies to block viral entry. He started in mice and expects results within weeks. ‘Our strategy is to encode all of the spike protein, but others are encoding parts of it,’ he explains. ‘Which strategy is best we will know over the next few weeks when people start to generate data from animal models.

Because most RNA vaccine development so far has been directed towards highly profitable personalised treatments for cancer and rare diseases, production is mostly geared towards small numbers of doses. ‘Economics pushed it in that direction,’ says Shattock. ‘There is no licensed RNA that is being manufactured in tens or hundreds of millions of doses. That infrastructure needs to be built.’ The Covid-19 outbreak could provide the stimulus to develop those facilities.

Shattock speculates that two or three RNA vaccines will ultimately be selected for larger trials against Sars-CoV-2. ‘It is a race, but a race against the virus rather than each other,’ he says. ‘Some people will be faster, but I don’t think there will be huge differences.’ There could be rare side effects, which early tests will not pick up, so redundancy is advantageous.

Depending on the societal impact of Covid-19, regulators may have to consider a fast-track process to get mRNA vaccines to people sooner. Otherwise, a vaccine may not be approved for two years, and mRNA vaccines could once again end up sidelined, waiting for the next big outbreak.