The first switchable dendrimer, which can expand on demand by almost 40%, has been made by researchers in China and the Czech Republic. 45 rotaxane units – rings that thread around the tree-shaped molecule’s branches – are responsible for the expanding and contracting motion. 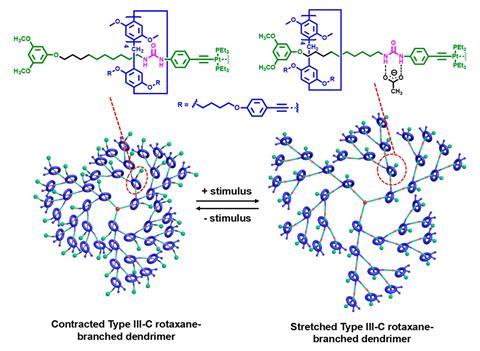 Rotaxanes are mechanically interlocked structures in which a macrocycle is threaded around linear molecules. They resemble a wheel on an axle. Chemists have previously used rotaxanes to make switchable systems – for example a compound that catalyses one of two different reactions depending on its conformation.

This the first example of a new type of rotaxane-branched dendrimer with the ability to swell and shrink on demand. What makes its concerted molecular motion possible is its clever architecture. Each branch is surrounded by one rotaxane wheel, and each wheel is connected to two more branches. The biggest, fourth-generation dendrimer the researchers made contains 45 switchable [2] rotaxanes.

In its contracted state, the rotaxanes’ macrocycles hydrogen bond to a urea unit built into the branches. But since urea prefers to bind to a stronger hydrogen-bonding acceptor, adding acetate anions forces the macrocycle to move, expanding the entire structure by more than 38%. Adding sodium hexafluorophosphate removes the acetate and the structure shrinks back to its original size.

Rotaxane-branched superstructures could be made into smart, shape-changing materials. They could also serve as molecular traps, using the contracting motion to capture other compounds.