Russia denies involvement in leak of radioisotope detected over Europe

Ruthenium-106 is thought to have escaped from a nuclear reprocessing facility, possibly in Russia

Russia’s environmental monitoring service, Roshydromet, has confirmed that it recorded ‘elevated’ levels of ruthenium-106 in the atmosphere in late September and early October. However, it added that these were 100–10,000 times lower than the maximum permissible levels. This confirmation comes after the French Institute for Radioprotection and Nuclear Safety (IRSN) said it detected elevated ruthenium-106 levels over Europe in late September, something it reported earlier this month. The IRSN said that the measured levels of ruthenium-106 were of no consequence for human health or the environment. 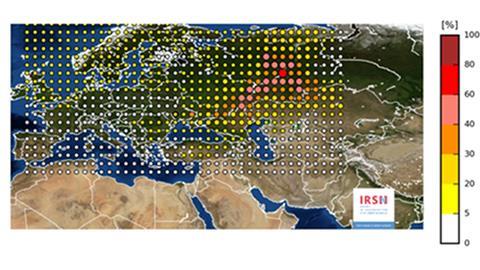 The IRSN calculated that the most likely source for the radioisotope was between the Volga and the Urals, suggesting that the leak of radioactive material occurred in Russia or Kazakhstan. The institute had reported levels of ruthenium-106 of a few milliBecquerels/m3 of air, a factor of 900 up on natural levels. The data indicated an accidental release from a nuclear fuel treatment site or centre for radioactive medicine. It points out that if an accident of this magnitude had happened in France, the authorities would have put in place protection measures for people living within a few kilometres of the nuclear site.

Greenpeace Russia said that the highest concentrations of the radioisotope were in the region that contains the Mayak facility run by the state nuclear agency Rosatom in the Southern Urals. Mayak is a nuclear complex that reprocesses spent nuclear fuel and processes different forms of radioactive waste.

However, Rosatom, Russia’s nuclear regulatory body, has insisted that there were no incidents at any of its nuclear facilities. It points out that similar concentrations of ruthenium-106 were observed in Europe, and the values recorded in Romania were, in fact, several times higher than those recorded in the Russian Federation.

Paddy Regan, a nuclear physicist at the University of Surrey, UK, says the levels detected are not particularly high, and isotope decay appears to have been measured in isolation rather than with the usual cocktail of other fission fragment signatures. ‘If it was a reactor leak or nuclear explosion, other radioisotopes would also be present and, from the reports, they are not. This suggests a leak from a fuel reprocessing plant or somewhere they are separating the ruthenium, possibly for use as a medical radiopharmaceutical/diagnostic material.’

Ruthenium is very rare so its presence in the atmosphere suggests an ‘event’ of some kind, says Malcolm Sperrin, director of the department of medical physics and clinical engineering, Oxford University Hospitals NHS Trust. ‘That being said, the natural abundance is so low that even a factor of 900 up on background levels is still very low.’ Ruthenium is mined in the Urals, he points out, but it is unlikely that the detected isotope has arisen from mining activity unless refinement and isotopic isolation has occurred on-site. ‘It is difficult to understand why other isotopes more consistent with an accident have not been identified [as well]. This suggests that, unless the evidence changes, that this release is not as a result of a greater accident.’