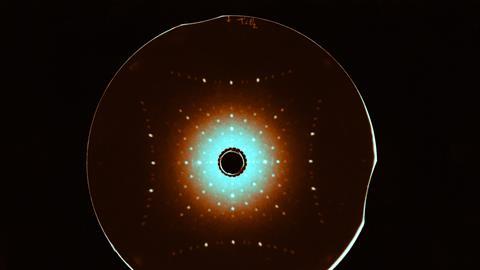 ‘The reported structures show a suspicious misorder – others call it disorder – with half-occupied atomic positions and partially colliding atoms,’ says Ulrich Müller, an emeritus professor at the University of Marburg who led the study together with Stephan Schulz from the University of Duisburg–Essen.

Müller is convinced that there are many more inaccurate structures out there and points out that too much confidence in computerised structure determination routines isn’t good. In this case, inspection of the original x-ray data revealed the presence of superstructure reflections – very weak reflections found between the main ones – which the computer had missed, he says.

The crystal structure of iodine azide (IN3) was first determined by x-ray diffraction in 1993.2 Almost 20 years later, a group working with Schulz found a second form of the compound.3 Now, the researchers have determined corrected structures for both phases, called α-IN3 and β-IN3. ‘The new structures paint an improved picture of the atomic positions and likely afford more accurate and precise interatomic bond distances and angles,’ comments inorganic chemist Douglas Keszler from Oregon State University in the US.

The incorrect (left) and corrected (right) structures of α-IN3 and β-IN3. Nitrogen atoms are shown in light grey, iodine in dark grey

Andrew Beale, a functional materials researcher at University College London (UCL) in the UK, adds that the c-axis in the corrected crystal structure is two times longer, leading to the creation of a supercell. ‘This removes the problem of some of the nitrogen atoms being too close to each other, which demonstrates that the original structures must have been incorrect,’ he says. ‘Furthermore, instead of two nitrogen atoms being present in a particular position 50% of the time, they are now only present in one position 100% of the time, which is consistent with a superstructure.’

‘This work is a textbook example why the automated data processing performed by modern software packages can only assist but not replace human expertise in the determination of crystal structures,’ notes Alfred Amon, who researches metallic and inorganic matter at UCL. ‘The automated algorithms with default settings act as a black box and obscure details in the data, which would have been otherwise easily discovered by a human observer.’ He adds that although programs have become easier to use and new algorithms have been developed to deal with more complex structures, automated tools aren’t flexible enough to adapt to every problem.

Beale mentions that the nature of the compound also plays a role. ‘Samples that are difficult to prepare and handle, such as these, will only increase the challenges of obtaining a reliable structure solution,’ he says.

Müller says the new results show that computers still can’t compete with humans when it comes to analysing x-ray data. ‘The pre-settings of the automatic algorithms can be adapted so that the described error is avoided. However, that will only work if it’s done by a human with crystallographic expertise. Always inspect the primary x-ray data carefully before you trust a computer!’

But Beale thinks that things could get better. ‘Great strides have been made applying AI-based methods for interrogating diffraction data and one can imagine that by incorporating this and other problems into a learning process, automated structure determination will improve.’