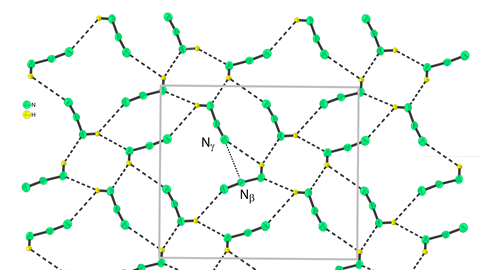 Hydrazoic acid poses significant handling challenges. It is a volatile liquid with a boiling point of 36°C that is highly toxic and very hygroscopic. But this is overshadowed by its endothermic nature.

Kläpotke and his team had first recorded a single crystal x-ray structure of HN3 back in 2011, it provided only limited information so they were keen to get a higher-quality powder structure using synchrotron radiation. The group has extensive experience working with explosive materials, particularly those with a very high nitrogen content.

Now the team’s synchrotron experiments, conducted at Desy in Hamburg, Germany, revealed in minute detail how hydrazoic acid is built up from pseudotetragonal layers, with the molecules in each layer held together by weak hydrogen bonds. These are stacked together, held by van der Waals forces.

Preparing the sample was, unsurprisingly, a tricky exercise. ‘We designed a closed glass system, consisting of a small glass bulb linked to an x-ray capillary,’ he says. ‘We loaded the glass bulb with stearic acid and sodium azide, two safe-to-handle, harmless solids. Then we evacuated the whole device and flame-sealed it, before heating it up in an oil bath to about 100°C. The stearic acid melted and reacted with the sodium azide to give solid sodium stearate and HN3, which is volatile.’

They cooled the capillary using liquid nitrogen, which condensed the hydrazoic acid from the bulb, and flame-sealed it, still in liquid nitrogen. The process didn’t work first time – Kläpotke says it exploded several times while they were trying to seal off the capillary. ‘But there are only milligrams in the capillary, and if the operator wears a safety shield and gloves, it gives them a bit of a fright but there is no danger,’ he explains. 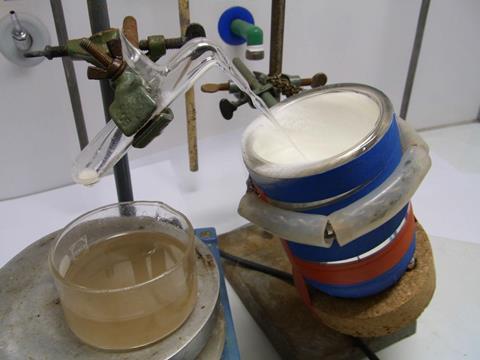 Hydrazoic acid, captured in a liquid nitrogen-cooled capillary on the right, is produced in the reaction between stearic acid and sodium azide at 100°C

The thin glass capillary was then warmed up to room temperature, and taken more than 400miles (650km) north to the Desy synchrotron facility. There, it was cooled again slowly to crystallise the hydrazoic acid.

Klapötke says that, unlike most of his work, this study was purely academic. ‘Hydrazoic acid is the simplest azide, with a nitrogen content of almost 98%,’ he says. ‘It has nothing to do with the majority of our work, which is on military explosives. It is far too sensitive for anyone to use on a larger scale.’

Paul Kelly of the University of Loughborough, UK, who has experience in energetic inorganic chemistry, says work on transient or unstable molecules like this can give fundamental insights into bonding. ‘Though hydrazoic acid has been known for more than a century, and only contains four atoms, we still lack a full understanding of its properties,’ he says. ‘What this work shows is that with the right experience, and with due care and attention, you can bring real cutting-edge techniques to bear, however hazardous a molecule may appear.’

The method will allow crystals of other challenging materials to be studied, Klapötke says. They have already started looking at halogen azides, and in the future want to study other highly explosive, volatile azides.