Find out more at http://rsc.li/CarbonFixation

While it gets plenty of attention, ‘synthetic biology’ today is nowhere near as systematic as synthetic chemistry – but Tobias Erb is changing that. The German scientist and his colleagues from the Max Planck Institute for Terrestrial Microbiology in Marburg have used ‘metabolic retrosynthesis’ to link diverse enzymes into bespoke carbon dioxide-consuming cycles.

Erb’s team’s first system links 17 enzymes originating in bacteria, archaea, plants, and humans, which convert the troublesome greenhouse gas into larger glyoxalate and malate molecules in a test tube. ‘Implementing our pathway into a photosynthetic organism, such as algae, so that it can fix carbon dioxide more efficiently and towards a more dedicated product is a mid-term goal that should be achievable,’ Erb says. 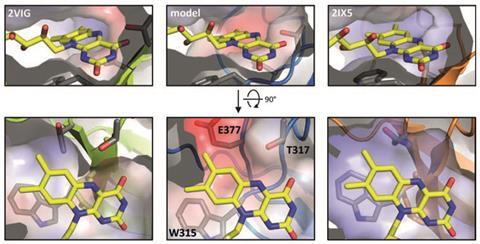 Having spent his career analysing enzymatic processes, Erb wanted to emulate the rational organic chemistry reaction design approach known as retrosynthetic analysis. This contrasts with how scientists previously tried to design artificial pathways for carbon dioxide fixation. ‘Scientists usually design a pathway on paper, and throw all the genes together into one organism,’ Erb says. If this approach doesn’t work it’s hard to know why, because living organisms are so complex. ‘We thought of building from the bottom-up, starting in a reaction tube.’

Two weeks of retrosynthesis suggested around 70 enzymes that might each enable one chemical conversion step in their intended cycle. Then came two years of lab work, exploring around 50 versions of the cycle in various conditions, producing 2,000 samples. An important advance came when the scientists found an oxidation step was slowing the cycle down. Erb’s team consequently modified the enzyme responsible so it could directly use oxygen as a feedstock, rather than complex electron transfer chemistry that includes iron, ultimately improving fixation efficiency 20-fold. Consequently, the resulting crotonyl-CoA/ethylmalonyl-CoA/ hydroxybutyryl-CoA (CETCH) cycle seems slightly faster, and requires less energy, than the main carbon fixation cycle used by plants.

Erb is optimistic that this could enable designer organisms making specific chemical building blocks from carbon dioxide that could compete with fossil fuels. He reveals his team already has a working system for converting glyoxalate into glycerate. The next step would be making glycerate into glycerol, from which ‘you can go wherever you want’ in producing commodity chemicals, he claims.

‘This work demonstrates the great advantages of in vitro enzymatic pathways – rapid pathway assembly and validation,’ comments Yi-Heng Percival Zhang from Virginia Tech. Side reactions and lower real-life carbon dioxide concentrations will pose the CETCH cycle challenges, he adds, but he still considers the approach ‘innovative and promising’.