A programmable platform for stereodivergent synthesis

Chemists have created a molecular machine that can selectively prepare the four diastereoisomers of a chiral product.

‘In biology, molecular machines are used to control how natural products are constructed and the order in which functional groups are manipulated by passing substrates from active site to active site in super-enzyme complexes,’ says David Leigh of the University of Manchester, who led the team behind the research. ‘Some years ago we started wondering, “Why can’t chemists do the same?”’

The new machine features a pH-responsive rotary switch fixed in a rigid platform with two chiral activating sites of opposite handedness. Using acids and bases, the motor can be spun at different stages of the synthesis to ‘select’ between the four possible final products. Leigh calls these sequences ‘programs’ because they function in a similar manner to a computer program. 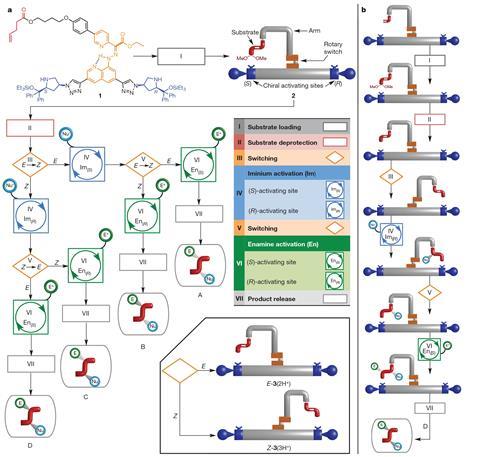 The molecular machine synthesises different products by moving a substrate between different activating sites. The stereochemistry of each chiral centre in the product depends on the handedness of the machine’s activating sites

Two different mechanisms – iminium and enamine activations – determine the final configuration of the products. The absolute configuration is determined by the handedness of the active site during iminium activation. On the other hand, the enamine activation process is responsible for the selection between syn and anti relative configurations. Despite all these different possible pathways, ‘reactions are carried out in one pot, no purification of intermediates is necessary, so that means that they have to be clean’, Leigh explains. He adds that using NMR spectroscopy, ‘we can follow the changing state of the machine during each program’.

The machine allowed Leigh and colleagues to synthesise isomers that could not be prepared using classic organocatalysis methodologies. However, ’It didn’t work exactly as we intended – two of the products were produced by different programs to those we originally envisaged,’ says Leigh. ‘This illustrates the complexity involved in designing molecular machines with multiple integrated parts. Sometimes these parts interact or interfere with each other in ways we don’t anticipate, and of course we learn from that for next time.’

Fraser Stoddart, who shared the chemistry Nobel prize last year for his work on molecular machines, tells Chemistry World that ‘there is little doubt that one of the main and important early applications of artificial molecular machines is going to be in stereoselective synthesis’.

‘The roadmap will be determined only by the imagination and creativity of chemists who enter the field,’ he says.