Using phosphorus atoms as removable spacers, scientists have fine-tuned the strain in a platinum electrocatalyst’s crystal lattice. Inducing different amounts of tension or compression dramatically changes the catalyst’s activity, more than doubling it in some cases.

In 2017, researchers led by Mingshang Jin of Xi’an Jiaotong University in China and Yadong Yin of University of California, Riverside, in the US developed a protocol to insert a tunable number of phosphorus atoms into the crystal lattice of a palladium nanocube, creating voids between the palladium atoms, thereby increasing the lattice spacing. This process could be reversed by heating the nanocube in nitrogen to drive out the phosphorus. 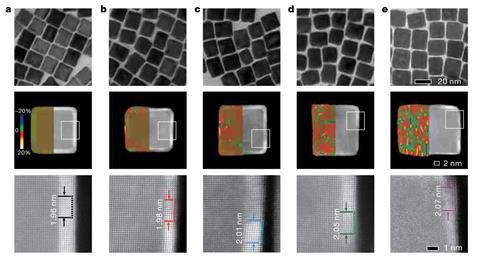 Now, their teams, together with that of Jianbo Wu from Shanghai Jiao Tong University, China, used this method to tune the lattice strain in platinum catalysts. To achieve tensile strain, they deposited platinum onto palladium nanocubes before using their protocol to insert variable amounts of phosphorus. To achieve compressive strain, the researchers used the opposite trick, inserting a carefully chosen amount of phosphorus into the nanocube, depositing the platinum and then squeezing out the phosphorus.

In the hydrogen evolution reaction, tensile strain of around 3% increased the platinum catalyst’s activity by approximately 50%, whereas compressive strain reduced it. For the methanol oxidation reaction, tensile strain of 4.7% and compressive strain of 3.9% both more than doubled the catalyst’s activity. This seemingly puzzling behaviour can be explained by changes in the catalyst’s electronic structure under strain. ‘It was actually known that, if you change the strain, it changes the energy of the d-band centre that controls how the reactants adsorb onto the surface,’ explains Yin.

The researchers would like to move the technique into industry, where it could potentially lead to precious metal catalysts with greater atom economy. However, there are also significant obstacles, most notably that palladium is expensive, even more so than platinum. ‘At present we don’t have any candidates [to replace palladium]… but that is the ultimate target,’ says Yin.

Materials scientist Younan Xia of Georgia Tech in the US says that ‘the idea that strain can be used to tune catalytic activity has been extensively explored for many decades. But in this work they can use essentially the same materials system to achieve either tensile or compressive strain and tune both over a very wide range.’ ‘To me, it’s most interesting to figure out how phosphorus penetrates through platinum,’ he adds.