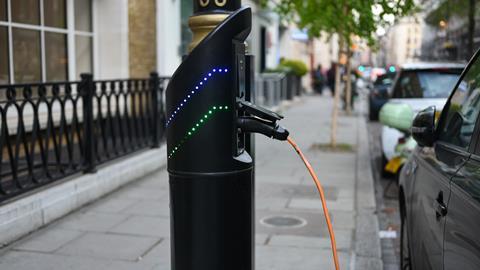 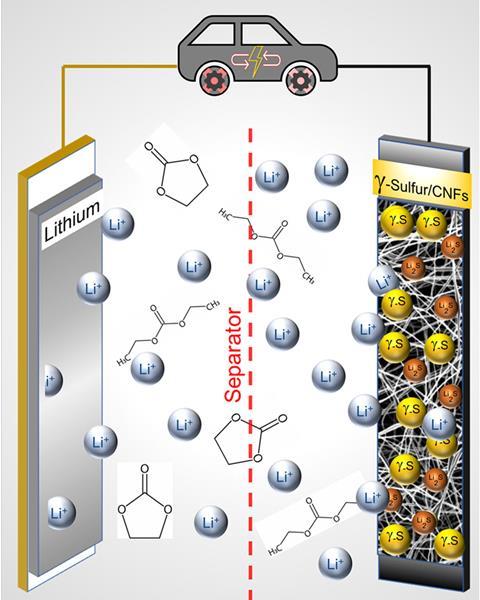 Researchers have created a sulfur cathode that does not react with carbonate electrolytes to produce polysulfides that are known to diminish battery performance. The discovery could pave the way for commercial viability of high-performing lithium-sulfur batteries

The stabilisiation of a rare form of sulfur has allowed researchers to cut out troublesome side-reactions in lithium-sulfur (LiS) batteries – a discovery that could help usher in the next generation of energy storage.

LiS batteries are hotly tipped to be stars in a transition to electrification as sulfur is cheap, abundant and packs an energy punch. For applications where energy density is critical – aviation for example – lithium-sulfur batteries could be the answer. But LiS batteries have some major problems to overcome before they hit the market.

Now, Vibha Kalra at Drexel University, Philadelphia, US and her colleagues have stumbled across a way to stabilise a different crystal form of sulfur, that in turn seems to eliminate a lot of the headaches facing LiS batteries.

LiS batteries’ older cousin, lithium-ion batteries, are tried and tested but come with some serious drawbacks: the cobalt used in the cathode is scarce and the humanitarian cost of mining it – often by children in terrible conditions in the Democratic Republic of Congo – is huge.

So a shift to a different kind of lithium battery could be transformational. But there are problems with LiS technology. The basic reaction at the cathode is positive lithium ions reacting with sulfur to make lithium sulfide. But the polysulfide intermediates that form are a big headache. In conventional carbonate electrolytes, the polysulfides react irreversibly with the electrolyte, killing the cell immediately.

To counter this, one strategy has been to try new ether electrolytes that dissolve the polysulfides. But Kalra argues these electrolytes aren’t practical for large-scale manufacturing, as they are often volatile organics. And to temper the polysulfide formation, the amount of electrolyte needed hampers the energy density of a battery.

Kalra’s idea was to find a way to make the batteries work with a more industrially-friendly carbonate electrolyte – widely used in lithium-ion batteries. She thought that by physically constraining the sulfur in a carbon nanofibre, the polysulfides would be trapped in the nanofibre and wouldn’t react with the carbonate electrolyte at all. 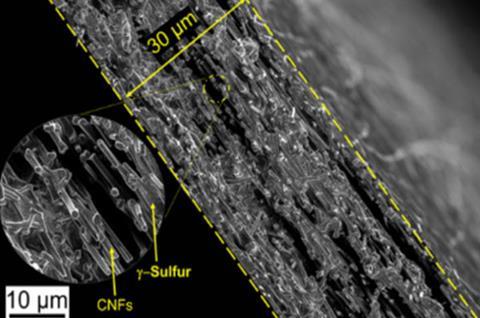 The sulfur cathode functions in commercially used carbonate electrolytes and can improve the capacity and lifespan of the highest performing lithium-sulfur batteries (CNF; carbon nanofibre)

When Kalra tried to confine the sulfur by vapour deposition, it didn’t work. But what she and her team found instead was that when mixed into the carbon nanofibre the sulfur became stabilised in a really rare form – monoclinic gamma sulfur, compared with the more usual, stable orthorhombic alpha sulfur. Gamma sulfur is usually unstable at room temperature and has a rectangular prism structure formed of eight sulfur atoms packed in a different structure to orthorhombic alpha sulfur’s crown shape.

When they put their carbon nanofibres into a battery cell, with a carbonate electrolyte they were able to cycle it 4000 times without losing performance. ‘We tested it many times because this was too good to be true,’ says Kalra. The gamma sulfur, which wasn’t confined within the carbon nanofibre as planned, but on the surface, seemed to stop the formation of polysulfides completely. Instead lithium sulfide forms directly, allowing the battery to work unimpeded.

Kalra has patented the technology, but now needs to spend significant time doing more in-depth characterisation while the batteries are in use. Why and how the gamma sulfur allows lithium sulfide to form without any polysulfides is a key question that, so far, Kalra doesn’t have an answer to. ‘We need in operando x-ray diffraction, that’s definitely a good next step,’ she says.

Heather Au, a LiS battery researcher at Imperial College London, says that being able to operate these batteries in carbonate electrolytes could be beneficial ‘because it’s already used in lithium-ion batteries, it becomes a bit more of a drop in technology’. And Au says that Kalra’s use of a free-standing electrode in this case takes away much of the extra weight associated with many electrodes that need to be mixed with additives to help them conduct, and current collectors to complete the cell.

Au agrees that the next step will be crucial. ‘There’s not really very much understanding of how this conversion mechanism is working. So I would be very interested to see the follow up work on this,’ she says.