New findings could change the way we think about prehistoric peoples 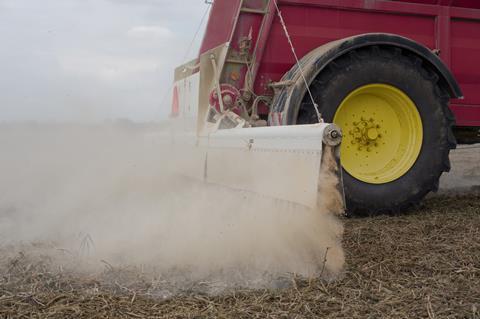 Researchers in Denmark have discovered that the modern-day application of agricultural lime to the soil can affect the ratio of different strontium isotopes in surface waters, masking the isotopic signature of the underlying geology of any given area. This has significant implications for the study of prehistoric peoples and artefacts, which are based on strontium reference maps that do not consider this factor.

Erik Thomsen and Rasmus Andreasen, from Aarhus University, measured the strontium isotope composition of surface waters unaffected by agriculture, as well as those in nearby areas where lime had been added to the soil by farmers, in parts of the Jutland peninsula. They found a significant variation in the isotopic composition between the pristine and farmed areas, which they claim is almost certainly due to modern agricultural activity. 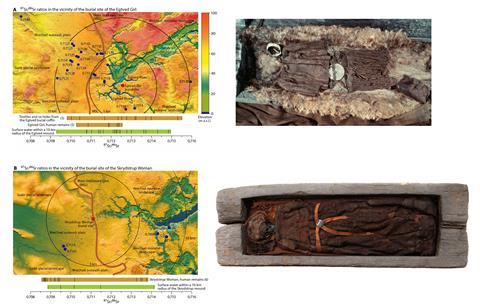 87Sr/86Sr ratios measured in the remains of the Egtved Girl (top) and the Skrydstrup Woman (bottom) could have been obtained within a radius of 10km of their respective burial sites, suggesting these individuals originated close to their burial sites and not far abroad as previously suggested

Strontium is a naturally-occurring mineral that can be absorbed by the human body in a similar way to calcium. Strontium has several isotopes, the ratio of which is characteristic of the specific geological profile of an area. The ratio of 87Sr to 86Sr is used widely in archaeology to match prehistoric human remains to specific geographical areas, such as in the study of Denmark’s bronze age Egtved girl and Skrydstrup woman.

Thomsen and Andreasen say their discovery casts doubt on the reliability of existing isotopic maps, which do not consider the effect of agricultural lime. ‘Our findings may well have implications for quite a few studies, especially those conducted in farmland that formerly were glacial outwash plains,’ says Andreasen. This has ramifications not just for researchers in Denmark, but also for archaeological studies in Europe, Asia and North America.

Recent studies have used existing strontium isotope maps to suggest, for example, that Egtved girl lived her early life in Southwestern Germany, travelled to Denmark in her mid-teens and journeyed back and forth over large distances during the final months of her life. The revised data indicate, though, that she could have been born in Denmark and may have lived and died within a short distance of her birthplace.

Researchers involved in previous studies of Egtved girl and Skrydstrup woman, however, remain unconvinced. ‘The new study from Aarhus does not change our interpretation of the Egtved girl’s and the Skrydstrup woman’s mobility in the Bronze Age,’ says Karin Frei, from the National Museum of Denmark. ‘In our view the data produced by the Aarhus researchers cannot be directly used in mobility research. Their interpretation is over-simplistic.’

‘The Aarhus researchers have measured strontium isotope compositions in water samples from areas around Egtved and Skrydstrup, which correspond to our measurements in the Egtved girl and the Skrydstrup woman, but the concentrations in these water samples are too low to be biologically relevant to humans,’ she continues.

However, with other studies failing to find any statistical difference between the bioavailable strontium isotope composition in soils from agricultural and non-agricultural land, it is clear that this issue is far from resolved. More work is undoubtedly required, before we can be truly certain where Egtved girl and Skrydstrup woman came from and how they really lived and died.