Scientists have synthesised a range of monosaccharides that can masquerade as those used by some bacteria to construct their cell walls. The monosaccharides interfere with glycan biosynthesis in a species-selective manner so could help establish a new strategy for designing molecules that attack pathogenic bacteria but not bacteria that support digestion.

Bacterial glycans that sit on the cell surface are important drug targets because they are critical to disease progression, host colonisation and pathogen survival. However, scientists know little about the biosynthetic pathways that construct them. They are also tricky to recreate in the lab.

Now, a collaboration between the teams of Danielle Dube at Bowdoin College, US, and Suvarn Kulkarni at the Indian Institute of Technology Bombay, has created analogues of the rare monosaccharides that feature in the bacterial glycans of some bacteria. The analogues encompass three benzyl glycosides and three 3-fluoro compounds.

To synthesise the benzyl glycosides, they carried out nucleophilic displacements of triflates producing thioglycoside donors, and glycosylated them using benzyl alcohol. ‘Synthesising the 3-fluoro compounds was more difficult,’ explains Kulkarni. ‘The approach that proved successful involved selectively opening and inverting the hydroxyl group at the C3 position of d-rhamnose. We then fluorinated the third position using diaminoethyl sulfur trifluoride. We inverted the C4 position, and altered it using different nucleophiles, which allowed us to create different inhibitors.’ 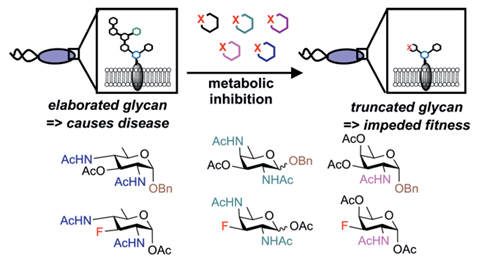 Metabolic inhibitors, based on rare bacterial monosaccharide scaffolds, were assessed for their ability to interfere with glycan biosynthesisin pathogenic and symbiotic bacterial species

Carbohydrate synthesis provides more challenges than protein synthesis, which may explain why there is less research on glycans. ‘Making a peptide bond involves forming a linear amide bond, but carbohydrate synthesis is more complicated, you need to protect the hydroxyl groups and couple the glycans, but coupling involves forming a new chiral centre, so there is the potential to produce two different isomers. You need to have the right conditions to produce the correct isomer,’ explains Kulkarni.

‘The syntheses are exceptionally elegant, and it would have been difficult to work out the right conditions to use,’ comments Meghan Blackeledge, whose research at High Point University, US, involves manipulating bacteria using small molecules. ‘But these syntheses could potentially be done by a number of different researchers to develop further inhibitors to study these glycans.’

The researchers then tested how these analogues affected glycan synthesis in the bacterial species Helicobacter pylori, a bacteria linked to gastric ulcers and cancer, Campylobacter jejuni, a foodborne pathogen and Bacteroides fragilis, which is part of a healthy gut microbiome. They found that the analogues impaired glycoprotein synthesis in H. pylori, leading to reduced growth, movement and biofilm formation. However, the inhibitors had no effect on C. jejuni or B. fragilis, indicating that their effects were species selective.

‘The sugars we chose are not used by human cells, so they should be able to interfere with bacterial sugars without interfering with mammalian glycosynthesis,’ explains Dube. ‘These molecules might never become antibiotics, but will yield fundamental insight into glycan structures and their functions.’

‘Taken together, these results will have a profound impact in the field of microbiology and chemical glycobiology,’ says Charles Gauthier, whose research at INRS-Institute Armand-Frappier Research Centre, Canada, involves developing new glycosylation methodologies. ‘Ultimately, they could lead to the development of antibiotic alternatives with exquisite selectivity against resistant pathogens.’