Scientists in China have developed a macrocyclic compound that can mask the bitter taste of alkaloid drugs. The water-soluble compound forms a complex with alkaloids but subsequently releases them in the digestive tract, where they can go on to exert their pharmaceutical effect.

Compliance is a key issue for pharmaceuticals. In fact, according to a study from 2018, only around half of all prescribed medicines for long-term conditions are taken as intended in first-world countries. Bitterness may be a key reason for this since humans have historically associated a foul taste with toxicity.

Bitterness is a particular issue for alkaloid-based medications, which contain basic nitrogen atoms in their structures. To address this problem, healthcare professionals advise taking such drugs alongside food and drink, and formulation scientists have also applied various coatings to them, with mixed results. Previous studies tried trapping alkaloids inside cyclic oligosaccharides called cyclodextrins, but they either did not form effective complexes or did not promptly release their bound guest once inside the body. 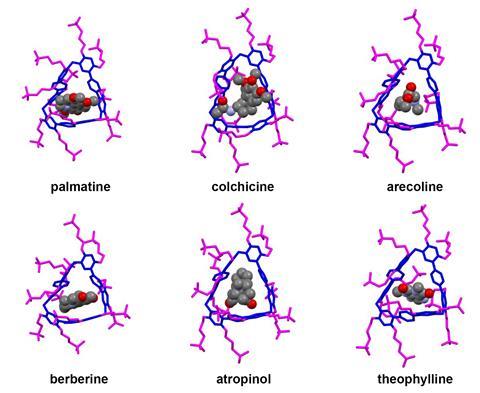 Now, a team surrounding Qingbin Meng of Beijing Institute of Pharmacology and Toxicology, and Chunju Li of Tianjin Normal University, has devised a new supramolecular solution. They identified a functionalised terphen[3]arene compound to serve as a host and demonstrated that it can successfully bind to six different alkaloid medications, including atropinol (taken for poisonings) and colchicine (a common treatment for gout), through its internal cavity. It has sulfonated sidechains, which provide the structure with excellent solubility in water, making it suitable for oral administration.

Tests showed that the complexes are pH responsive: the team recorded vastly different binding strengths at pH conditions representative of environments in the mouth (pH 6.8) and gastric acid (pH 1.2), meaning that the complex becomes unstable and releases the alkaloid once subjected to the acidic conditions of the stomach. Animal studies showed that the host terphen[3]arene compound was non-toxic and did not diminish the activity of the drug molecules it had carried. The researchers also used a taste-sensing system called an e-tongue to determine that co‑administration of the molecule drastically reduced the bitterness of the drugs.

‘To the best of my knowledge, there are no applications yet of synthetic containers such as the one reported in this work [for use] in the pharmaceutical industry,’ comments Ana Castilla, a supramolecular chemist with expertise in drug delivery based at the University of Greenwich, UK. However, applying this approach to other drug classes, and on an industrial scale, may still constitute a significant challenge. Castilla says the substantial task of finding ‘the right balance for interacting with the drug molecule without affecting their therapeutic effect’ must be achieved, whilst optimising a multitude of factors for commercial application.