Researchers from the UK have made a supramolecular complex comprising hydrogen-bonded rosettes sitting orthogonally inside a porphyrin nanoring.1 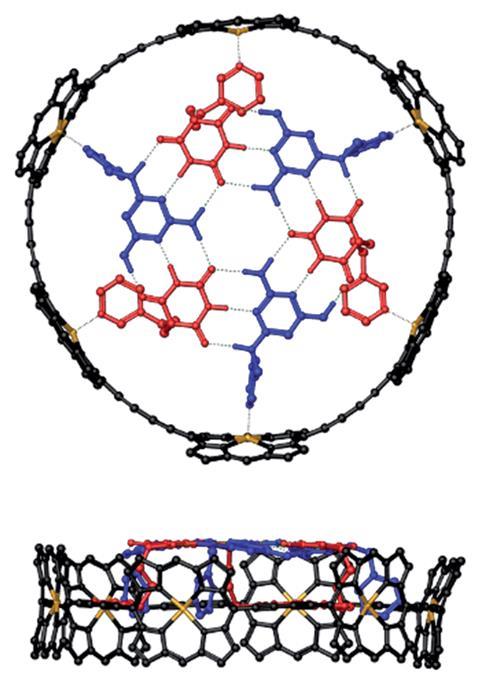 In nature, multi-component self-assembly is common in proteins and peptides. But for synthetic systems, it’s rare to find examples of different components assembling through orthogonal non-covalent interactions.

Porphyrin nanorings and hydrogen-bonded rosettes are two classic self-assembly motifs. Both systems also have unique electronic properties, which makes them potentially useful for applications such as light-harvesting, conducting nanomaterials and molecular machines, to name a few.

Now, in a collaboration between the University of Cambridge and the University of Oxford, Petr Motloch and colleagues have made a nanoring–rosette complex via cooperative assembly, a process combining seven components using hydrogen bonding and metal–ligand coordination interactions. The hydrogen-bonded rosette only assembles inside the porphyrin nanoring when it’s in the presence of all the components.

The components of the rosette, three pyrimidines and three barbiturates, were separately synthesised and equipped with pyridine ligands. For the nanoring component, the team used a previously reported complex with six zinc porphyrins linked with butadiynes.2

In solution, the pyrimidine and barbiturate can only assemble into the hydrogen-bonded rosette above a certain concentration. Likewise, the individual pyridine ligands do not coordinate to the zinc porphyrins at very low concentrations. When adding the porphyrin nanoring to a dilute mixture of the rosette forming components, the team discovered that a particularly stable complex formed at a stoichiometry of 1:3:3 (nanoring:pyrimidine:barbiturate). Their results also suggest that the supramolecular complex assembles in a stepwise manner.