Cathodes made from a sunlight-absorbing material could enable lithium–air batteries to work at low temperatures at which they would normally fail. 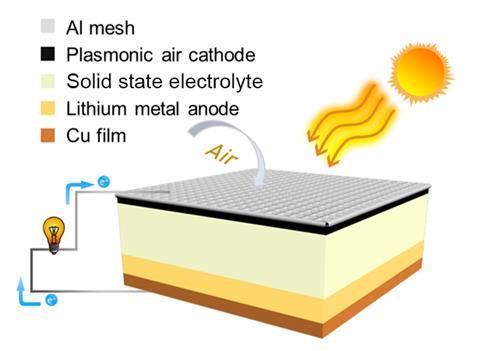 Now, Haoshen Zhou from Nanjing University, China, and co-workers have prepared a lithium–air battery that functions at ultra-low temperatures. A key component of their device is a porous cathode embedded with hybrid ruthenium nanostructures. The arrangement of these nanostructures induces a plasmon-enhanced solar photothermal effect – in other words, it efficiently converts sunlight into thermal energy. This localised heating enables the battery to operate in very cold conditions as long as there is enough sunlight. The team demonstrated that their device has a high discharge capacity at -73°C and record cycle lifespans both at -73°C and at room temperature. ‘Our battery can be used like ordinary lithium-air batteries at room temperature and high temperature,’ says Zhou. ‘However, at ultra-low temperature, the battery will work normally as long as there is enough sunshine.’

Chemical energy expert Colm O’Dwyer, of University College Cork in Ireland, is impressed by the approach the researchers used to keep the battery working. ‘Light interacting with specific metals the team put into the battery electrode improves the overall conductivity of the system, allowing it to function at these low temperatures,’ he says. ‘Basically, the resistance inside the cell is lowered dramatically by a photothermal effect, where the light is converted to heat that stops the resistance increasing as the temperature drops, keeping the cell viable.’ However, O’Dwyer highlights that a controlled light source is also key to the system working.

Zhou hopes the batteries will feature in electric vehicles. Marca Doeff, from the Lawrence Berkeley National Laboratory, US, and chair of the battery division at the Electrochemical Society, suggests that space exploration vehicles, such as the Mars rover, could use them. ‘As with any new concept, further testing and evaluation will be necessary to assess whether cycle life, performance, and cost goals can be achieved for any application it is intended for,’ adds Doeff.