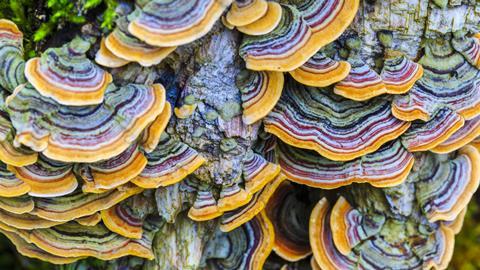 Metalloenzyme changes its structure in harmony with the pH of the battery, promoting oxygen reduction and evolution as required

Including an enzyme in a rechargeable lithium–air battery can improve the kinetics of internal reactions that previously limited the performance and durability of such electrochemical energy storage systems. This may nudge lithium–air batteries closer to powering electric vehicles and mobile devices.

‘The lithium–air battery is currently regarded as one of the most promising candidates for next-generation energy storage owing to its extremely high theoretical specific energy density of nearly ten times that of a lithium-ion battery,’ says Linlin Wang of Nanjing University, China, part of the team behind the new idea. However, such batteries are hindered by the sluggish kinetics of their oxygen reduction and oxygen evolution reactions, so must rely on catalysts.

Platinum typically takes on this catalytic role. However, not only is platinum expensive but because the pH of the electrolyte changes considerably from 3.5 to 7.4 as the battery cycles, over time the acidic conditions break the catalyst down.

As an alternative, Wang and her colleagues explored nature’s catalysts, settling on an enzyme found in the fungi Trametes versicolor. ‘Fungal laccase has high redox potentials that are very close to that of the oxygen/water redox couple and exhibits peak electrocatalytic activity over pH three to six,’ says Wang. Laccase also offers two active sites for electron transfer that sit relatively close to the enzyme surface, making it ideal for the electron transfer reactions. It is also stable over the pH ranges required for the lithium–air battery to operate. 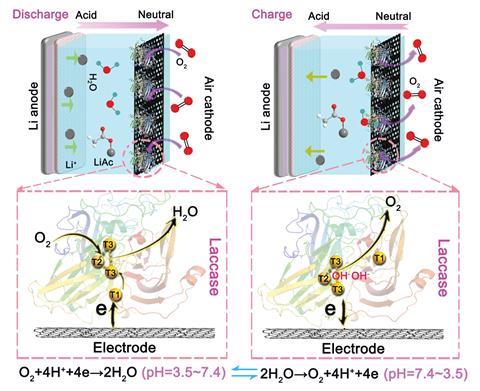 Laccase from Trametes versicolor exhibits good catalytic activity for both the oxygen reduction and oxygen evoltuon reactions in a pH range of 3.5–7.4

‘The use of an enzyme as a catalyst in a hybrid aqueous battery might effectively address some major issues of lithium–air technology, paving the way for a possible application in high-energy devices,’ states Daniele Lecce, a battery researcher at University College London, UK.

By covalently binding the laccase enzymes to carbon nanotubes, which offer good conductivity, Wang developed a working cathode that offered a stable voltage of 3.75V and a lifespan of 56 cycles over 1120 hours, outclassing that of the benchmark platinum on carbon catalyst.

Wang attributes this promising performance to laccase’s structure: ‘The superior catalytic activity and stability over a broad pH range is due to the active centre, which consists of two redox active sites, the mononuclear type 1-copper site and trinuclear type 2/type 3-copper site.’

‘The one idea that sticks out is using this enzyme with two catalytic cores,’ comments Stefan Freunberger, an expert in lithium–air chemistry at Graz University of Technology in Austria. ‘When the battery is completely discharged, then the oxygen evolution site becomes active as the battery brings the pH to neutral.’ As a result, the laccase active site changes synergistically with the pH of the electrolyte during charging and discharging, adopting a structure conducive to the oxygen reduction reaction or oxygen evolution reaction as necessary.

Despite the success of the laccase-catalysed lithium–air battery, Freunberger notes that lithium–air batteries must last longer and offer greater cycle life before they can compete with current lithium-ion technology. Wang and colleagues acknowledge this challenge and suggest that a future strategy for improving performance and stability may rest upon three dimensional electrode materials such as nanodots that can incorporate laccase-based catalysts or biomimetic catalysts that can alter their structure as electrolyte pH changes.