Natural wood (left) can be delignified to create a densified wood (right) that could help cool homes clad in it. The engineered wood’s ability to cool whatever it covers is a result of its ability to emit infrared radiation straight into space

Compressing wood to remove defects can make it so strong and tough that it can even stop a bullet. Now, researchers from the same team have shown that if wood is stripped of all lignin before this ‘densification’ the resulting material can also cool in bright sunlight. Buildings constructed using this material would have a significantly smaller carbon footprint thanks to a reduction in the amount of energy needed for air conditioning.

To cool a building below the ambient temperature in bright sunlight with no energy input seems to defy the laws of physics, which state that heat naturally flows from hot to cold. However, the sun, at about 6000°C, radiates largely at visible wavelengths and near infrared, whereas a building emits much longer infrared wavelengths. Conveniently, the atmosphere has an infrared ‘transparency window’ at which radiation can pass into outer space. Covering a building with a material that is reflective at visible wavelengths but emissive in this transparency window could, therefore, allow a building to radiate away its own heat into space, and thereby cool down in bright sunlight. 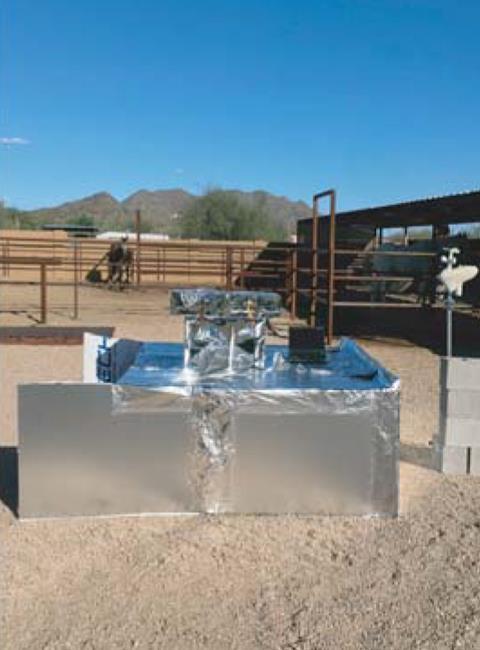 That’s the theory. In practice, the first such material, developed by Stanford researchers in 2014, comprised seven layers fabricated by electron beam evaporation. Other teams have gone on to create simpler, more practical surfaces such as paints and films that achieve the same effect. However, nobody has previously developed a structural material that inherently cools down in bright sunlight.

The new work is a collaboration between the University of Colorado, Boulder team that developed a cooling film and the University of Maryland, College Park team that developed densified wood. Before it can be completely densified, wood must be partially stripped of lignin to reduce its brittleness – this can be achieved by boiling with hydrogen peroxide. The researchers found that, if they stripped out all the lignin, the resulting densified wood scattered visible light very well, while being highly emissive in the infrared transparency window. Nevertheless, the material remained around nine times as strong and 10 times as tough as natural wood. This is counter-intuitive as lignin provides the structural support to natural wood. ‘If you strip out the lignin then a tree can’t stand anymore,’ explains the University of Maryland’s Liangbing Hu. ‘But when you strip out the lignin and press the cellulose fibres so they form a lot of hydrogen bonds in the dry state, you can maximise their interaction.’ 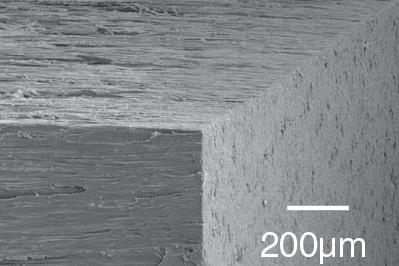 The densified white wood up close under a scanning electron microscope

‘I think it’s a really interesting paper,’ says Claes-Göran Granqvist of the University of Uppsala in Sweden. ‘It’s certainly some kind of super-material, with excellent mechanical strength, and it’s extremely white. Of course the cost is going to be very important and I cannot judge that from the paper here. But it’s also interesting conceptually that people are finally starting to think about radiative cooling in real, structural building materials, because in the past people have not really been aware of the cooling potential of the clear sky.’