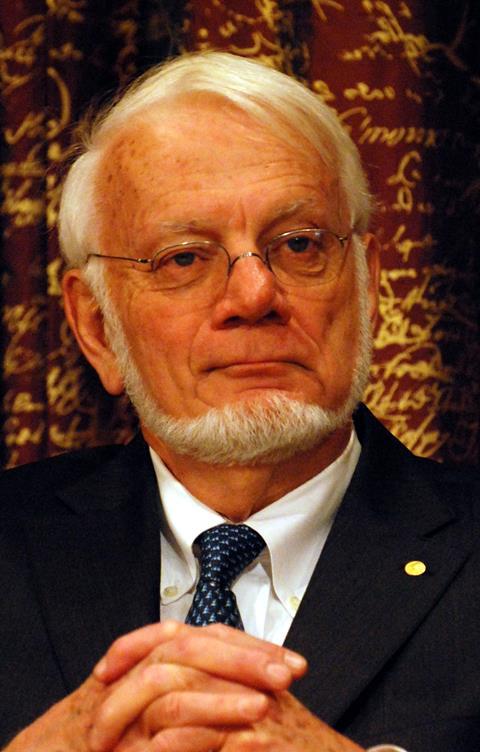 Thomas Steitz, a joint recipient of the 2009 Nobel prize in chemistry, has died aged 78.

Steitz published a landmark study detailing the atomic arrangement of the large 50S ribosomal subunit in 2000, using data obtained by x-ray crystallography. These findings, alongside the work of Ada Yonath and Venkatraman Ramakrishnan, helped determine the complete structure of the ribosome, offering new insights into how this complex cellular machinery turns information stored in DNA into proteins. Steitz, Yonath and Ramakrishnan were jointly awarded the Nobel prize in chemistry in 2009 for their work.

Steitz was born in Wisconsin, US, in 1940 and went on to major in chemistry at Lawrence College. Inspired by the work of Max Perutz, Steitz embarked on his PhD in protein crystallography at Harvard in 1963. Following his doctoral studies, Steitz spent three years at the MRC Laboratory Of Molecular Biology in Cambridge, UK, where he worked alongside the likes of Francis Crick, Sydney Brenner and Fred Sanger – all of whom won Nobel prizes. During his time in Cambridge, Steitz developed interests in trying to understand the structural basis of the processes involving nucleic acids and proteins that shape the chemistry of life.

Steitz took up a faculty position at Yale in 1970 and remained active there over the next five decades. He was a firm believer in the importance of good mentorship, and advocated face-to-face conversations, debate and discussions with colleagues through all stages of research.

Steitz married Joan Argetsinger – also a distinguished researcher in the field of biochemistry, known for her work on RNA – in 1966. Husband and wife worked together at Yale, where they both held the title of Sterling Professor of Molecular Biophysics and Biochemistry.

In a statement, Yale president Peter Salovey said that Steitz’s discoveries had been ‘critical to the creation of drugs that combat antibiotic-resistant bacteria’. Peter Moore, with whom Steitz closely collaborated on the work for which he was awarded the Nobel prize, said of Steitz: ‘Many scientists work on one problem all their lives, but he solved many. He was the most accomplished structural biologist of his generation.’

Steitz passed away on 9 October 2018, after developing pancreatic cancer. He is survived by Joan, his son Jon and two grandchildren.